The traditional Brown Willy Run on New Years Day was held in positively tropical conditions compared to the weather usually to be found at this time of the year on Bodmin Moor. This is a 7 mile run, not a race, without any official timing, although there is a prize for the first male and female back but the fast runners will always take it on with an aim to be at least in the top 10 finishers. Conditions underfoot were good too, with the runners having enough mud on their legs to show they had taken part, but the knee deep variety of bog was absent this year. There is always a great atmosphere at this gathering of runners, as it is a chance to get out after all the festivities and enjoy a run with friends. Okehampton Running Club was out in force with 17 runners including 4 juniors taking part and first back was Rob Hicks who is a regular here, enjoying his run which brought him home in fifth place, while Paul Crease was another top ten finisher. Jo Page has run here before with her family, but a 28 minute improvement on last year’s time saw her come home second lady by a mere few seconds to fellow ORC Mervyn Rice’s daughter, Jenny, visiting her family from her home in the Lake District where she is a member of the Helm Hill club. The rest of the Okehampton runners all took it at their own pace, some running with their children and even the “club mascot” dog Meg taking part.

The following Saturday saw a number of ORCs taking part in various Parkruns, some to test their fitness after some time off, others just using it as a chance for some speed work. At the Exeter Riverside Parkrun Jo Page set another PB, going under 20mins for the first time with a superb time of 19.52, to knock an incredible 47secs off the time she set in October and be the first lady. Jo Bradford had not run seriously for several months so was pleased with her time of 23.44, which was a course PB for her and a good base to start from. Jane Jackson tried out the Tamar Lakes Parkrun as a chance for a fast run having done little in that line over Christmas and was pleased to be the first lady in 25.55. 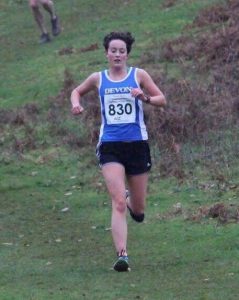 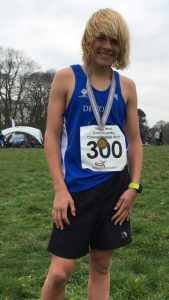 Sunday saw three young Okehampton runners all take part in the South West X-Country Championships, held at Aldon Hill near Yeovil, after good runs at the Devon Championships in December. Molly Marvin enjoyed the good going round a hilly course, having a great run to finish 5th Devon athlete and 12th in the Under 20 Ladies. Sam Priday was also in good form finishing 12th in the Under 15 Boys and 4th for Devon, giving him a silver medal for the second placed County Team. His younger brother Tom put in a great performance in a very strong Under 13 field where he came 56th.