As marathon training is getting into full swing for many Okehampton Running Club members, there are fewer taking part in the shorter races. but Angus Farrelly isn’t in marathon training however and was a lone ORC at the Castle Hill Corker, organised by South Molton Strugglers. This is a multi-terrain race of just 6 miles around the Castle Hill Estate, with some steep hills and a disused railway tunnel to run through, finishing in front of the house. There was also plenty of mud but Angus enjoyed the run finishing in 1.00.53. 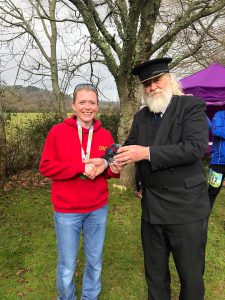 Railways seemed to be the theme at the weekend with two ORCs taking part in the Beat The Train race. This is a 6.8 mile route along riverside paths and woodland trails from Totnes to Staverton and back to Totnes. Starting from South Devon Railways Totnes Station, the train and the runners race to Staverton Station where the train has a short stop before returning to Totnes, giving the runners a chance to pull ahead and beat the train back. Jo Page and Hayden Bond both had great runs here, and despite a mix-up at the turn around point resulting in them completing a longer distance than intended, they both beat the train back, Hayden finishing in 56.02 for 8th place and Jo in 57.19 to be 11th overall, but winning the First Lady prize. 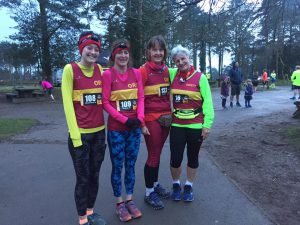 Saturday evening saw four ORCs take part in a completely new race, the Haldon Forest Twilight Run. Here there is a choice of a one lap 5k or two lap 10k course, the runners being taken along forestry tracks starting at twilight, with the darkness increasing through the race, with. Sarah and Molly Marvin chose the 10k race, but after getting lost twice they eventually completed in 58.25 after covering 7 miles. Sarah Bell and Fiona Porter did the 5k course and both enjoyed the atmosphere of trail running in the dark, a brave choice for Fiona for whom it was a first race experience, finishing together in 39.20.

At the Tavy 5kool run and the Exeter Riverside Parkrun on Saturday the 5k races were all about fast times. Rob Kelly and Paul Carter ran in Tavistock, with Rob setting a new PB of 17.28 while Paul finished in 18.48, both of them now in training for the London Marathon. In Exeter Claudine Benstead continues to get faster with every run there, beating her own FV55 club record again to finish in an incredible 20.30.

Thank you Jane Jackson for reporting and editing.