Rob Hicks, who ran the Westcountry Ultra 100, in fact started his race on Saturday, but completed on Sunday morning, just one of four runners to finish in under 24 hours, coming second in 22.53.11. This incredible race combines the routes of two fifty mile ultras, the first one a relatively flat course starting in Taunton and following the Bridgewater canal towpath all the way to Bridgewater docks, and from there coastal paths, trails and through villages to Minehead. The flat nature of this first section makes it hard for the runners to pace themselves to conserve energy for the second fifty which is considerably tougher. The second half sets off at the beginning of the South West coast path, which it follows all the way to Lynmouth, then up the river Lyn and onto Exmoor along the Coleridge Way, before crossing County Gate and dropping to sea level before one last big climb up Dunkery Beacon and home to Minehead. Despite the flattish first half the total elevation for the race is nearly 9,700ft of ascent. Only three weeks previously Rob had taken part in another hugely challenging event, The Great Lakeland 3 Days. This is not a race but an organised mountain marathon in the Lake District, where runners have to self-navigate and be self-sufficient throughout each of the three day’s runs although their kit and overnight equipment is transported between each overnight camp. There are three levels of difficulty and Rob ran the top level, the Elite, running 26 miles the first day, 20 the second and 17 on the last day, by which time he had climbed over 26,000 ft of ascent, more than climbing Everest! 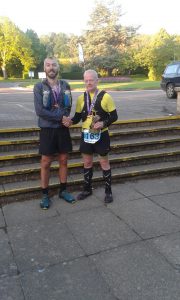 In Exeter three ORCs took part in the Exeter Marathon. This is a three lap race starting in St James Park and heading through the city centre to Exwick before returning along the Quay to Countess Weir with most of the route on the paths and cycleways beside the canal and River Exe. On such a flat and open course the blustery wind was a bit troublesome but all three runners ran well, with first ORC home being Roger Voaden, finishing in 3.11.00. Chris Turner, who continues to improve, was next home in 3.27.11 to set a new PB by one minute. Mark Hawkins had entered on impulse having not had a good run at the Madrid Marathon a few weeks ago due to the heat, and found the conditions here much more to his liking, finishing in 3.44.18 to knock a huge seven minutes off his current PB.

Just two ORCs ran the Burrator 10k on Sunday. This is a relatively flat course, set in beautiful scenery, is all on tarmac around Burrator Reservoir where the runners do one full circuit and then two thirds of it again, finishing at the Visitor Centre. George Haskell paid the price of setting off too fast in his race, slowing in the second half, to finish in 42.37. Kerry Morashti enjoyed her run in the lovely setting, finishing in 67 minutes.

Geoff Hill, has organised a new outing for members once a fortnight, an “ORCs on tour” trip to local parkruns, taking up to eight runners in his minibus. The first outing was on Saturday to the Tamar Lakes parkrun, and the opportunity inspired several members to try one of these events for the first time. This is not perhaps the fastest course, being slightly undulating, with runners doing one 5k lap following the tarmac and cinder paths around the Upper Tamar Lake. Ray Lawrence was the first ORC home in 19.26 to come second overall, 1st Vet Male and scoring the highest age graded percentage of the day on his 50th parkrun. Mike Baker was next in 20.54 on his debut run to come 3rd Male Vet, followed by another new parkrunner, Ed Dumpleton in 21.09. Sarah Marvin was the overall first lady home on her inaugural run in 22.06 with John Binns, for whom this is his local parkrun, not far behind in 22.19. Jackie Dawes, another first timer, was paced by local ORC Anne Binns, to set a new 5k PB with both of them finishing in 24.59 and both of them winning their age categories. Jane Richardson is definitely not new to these runs, having completed her 100th parkrun in Exeter two weeks earlier and finished in 29.39 to score the second highest age grade percentage and win her age group. Janet White was second in the same category in 32.46 on her first outing to a parkrun. Geoff Hill took this opportunity to run with his 11year old daughter Shelby who knocked over 5 minutes off her PB in only her second parkrun, to come first in her age group.