At the Cardiff Half Marathon on Sunday Okehampton’s Hayden Bond took part in a race he has been targeting and training hard for. This predominantly fast and flat course starts outside Cardiff Castle and heads down past Cardiff City Stadium then out to Penarth, taking in Penarth Marina before crossing the barrage into Cardiff Bay. From there it heads north out of the city with a loop around Roath Park Lake before the grandstand finish in the heart of the city at the Civic Centre. Hayden was aiming for his first sub-one hour thirty finish here which he achieved with an outstanding run to come home in 1.26.04, knocking four and a half minutes off his PB. 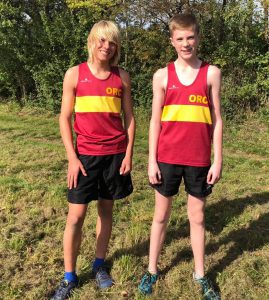 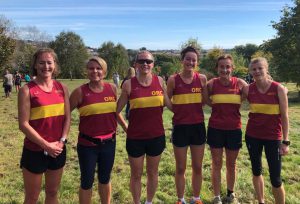 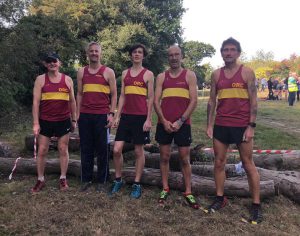 Last weekend saw the first fixture in the Westward League Cross Country series. Held in Plymouth, this event always heralds in the Autumn for the many club runners who take part in the league throughout the winter, although Sunday’s race was held in summer-like conditions of warm sunshine with not a breath of wind. The course here is hilly but the bone dry ground made for easier running than in last year’s thick mud. The ladies were the first to run with three runners who had taken part in previous years and three newcomers. Jo Page, barely recovered from her superb run at the Barnstaple Marathon, was the first home finishing in an excellent position. She was followed by Sarah Marvin, finishing for once ahead of her daughter Molly who was next in, followed by League rookie Karen King who had a great first run. Jane Jackson, also with the Barnstaple marathon still in her legs, was next with newcomer Christine Fritsch just two places behind. The club was well represented in the Under 15 boys race with two Okehampton runners trying the league for the first time. Sam Priday, had a brilliant run, despite having played rugby in the morning to storm home in fifth place with Harrison King, who is at the younger end of the age group, also running well. The men’s team was slightly depleted due to several usual league runners taking time off to recover from last week’s marathon, but those who did turn out ran well. Paul Crease was first in for the club with a fantastic run that gave him his highest placing ever, with a new member, Steven Sincock coming in next. Young Indigo Ramsey who was having his first league outing finished next followed by one of last year’s stalwarts Stuart Page. Inspired by his daughter Jo’s successes since joining the club, Ian Page also became a member last week and thoroughly enjoyed returning to the competitive League running scene of earlier years, finishing well cheered on by his new club mates.

While some club runners were in Plymouth for the Westward League a lone ORC was there to take part in the Plymouth 10k. Despite having done very little training in recent months Cam Whitelaw ran a good race, shaving just a small amount off his previous PB to finish in 1.00.24. 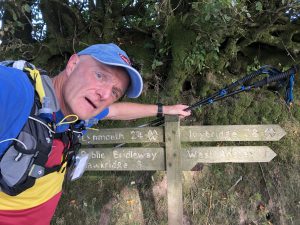 “Last weekend I completed a 100 mile Ultra Marathon event, the Two Moors Way. This was an exceptional challenge and one that should carefully be considered if anyone want to attempt a similar event.

The route starts at the Joe Turner statue on the Esplanade of Lynmouth and immediately there is a 150m steep climb out of the town before shortly breaking into open moor land. The route takes you over the open Cheriton Ridge, past Exe Head and down into the picturesque village of Simonsbath. After following the Barle River you come to the historic Tarr Steps. Large granite blocks of stone crossing the river. By this time I had run 20 Miles and ascended over 800m in 5hrs.

As I exited Exmoor I made my way across Mid Devon through lanes and fields rolling across the beautiful Devonshire countryside. Crossing the North Devon link road after a short stop for a change of clothes, tend to feet and a welcome hot food before setting off into the setting sun. I passed through Witheridge before stopping at the third food stop in Morchard Bishop. A considerable spread was laid on with hot chips and sandwiches, hot tea all the types of food these endurance runners need to maintain the calorific intake to keep powering themselves forward. A welcome greeting of fellow ORCs Gill and Phil Spinney who had volunteered to man this checkpoint boosted my spirits. I’d now climbed a total of 1600m, completed 43mile and had been moving for 11:30hrs.

The night was well and truly upon me as I made my way to Drewsteignton. This section is regarded as the flat section despite its 550m ascent, but that is the nature of this trail. I arrived in Drewsteignton a bit later than planned at 03:30 on Sunday morning, and was met by another fellow ORC, Chris Turner who had opted to man this station throughout the night. Another welcome face, a short pep talk, more encouragement and off I went. 60 miles done and the distance was starting to take its toll. I continued on through Castle Drogo grounds, around Chagford and following the Teign River before climbing onto Chagford Common. I chose to walk through most of the night to avoid the risk of tripping and potential injury, however walking gave little respite to my aching body.

The next stage was to make my way to the Warren Inn, high on Dartmoor where I rested a for short while and ate some hot porridge that I had been carrying all night, before setting off on the penultimate climb up and over the notorious Hamel Down. This is a steep ascent, across a high ridge before descending steeply to the outskirts of the beautiful Widecombe-on-the-Moor.

As the afternoon approached I made my final stop at New Bridge where soup, sandwiches and cakes awaited. The final push through the village of Scorriton and the long, and never ending climb up and over Pupers Hill, followed by the long winding descent into Ivybridge was within my grasp. The winding descent along a granite path was like walking on needles and lasted for 6miles. The pain and the exhaustion was well and truly upon me. Fellow ORCs followed with excitement my tracking device on their computers as I neared the finish line. Totally exhausted I became disorientated and confused and had to dig very deep into the last reserves of energy to retrace my steps to reconnect with the right path into Ivybridge.

The finish was in sight, I had completed this immense journey, a marathon of marathons. 100 miles, 3730m ascended, over 1million steps all in 34hrs and 32mins 22sec, being one of only six finishers from the 14 starters of the race. Despite the pain and the suffering that followed such an epic event it was all worth it, everyone has their own journey through life, their own motivation, this story is extraordinary. I am obviously very proud of my mammoth achievement and unsurprisingly have decided to rest for a few days before returning to club.”

As always, thank you Jane for your editing.