The one thing that can be guaranteed for the Westward League’s fixture at Westward Ho! is that it will be windy, but on Sunday it was the full force, energy sapping type of wind that was never behind you but always shoving you about. The pancake flat course is right on the coast with no protection from the wind, whatever the direction. It was much drier underfoot than in many winters, but there was plenty of thick, black mud in the ditches that had to be negotiated, knocking the runners out of their stride. There was a good turnout of Okehampton runners here with two juniors, and nine runners in both the men’s and ladies teams. 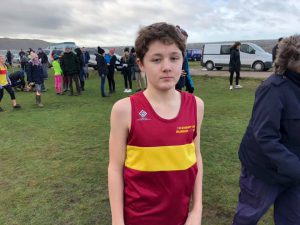 First to be put to the test round this very different type of course was Matthew Richards, a newcomer to the League races who has been training well with the club in recent weeks and had an excellent first run for the club in the Under 13 boys. Harrison King had to miss the December fixture due to an injured foot and hasn’t been able to train much since but got some good points here in the Under 15 boys race.

The ladies were lead home by Jo Page once again, barely seeming to be affected by the wind, setting an excellent pace for the conditions. Sarah and Molly Marvin were next, with Claudine Benstead, Issy Edworthy, Jo Bradford and Karen King not far apart. This is Issy’s first year in the Under 17’s category and she ran well. They were followed by Jane Jackson, Christine Fritsch and Mags Jarvis. 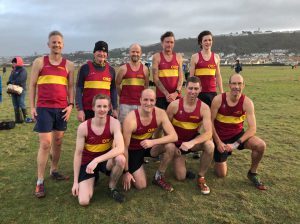 In the Men’s race Paul Crease ran his usual great race to finish well placed and first for the club. This fixture saw the return of Andy Vallance to the race circuit after months of house building and despite perhaps lacking his usual level of fitness he put in a solid performance to be next home. Paul Carter was next, but was being hunted down in the last lap by a brilliant performance from young Christian Davies who is going from strength to strength with each of his League runs now. Graham Bryant ran well too to be next home, to be followed by Stephen Sincock, with Indigo Ramsey, another improving young runner behind him and then Stuart Page. Ian Page ran a great race, picking off runners in his age category one by one and finishing strongly.

With the results now in there is good news for our teams, all of them improving their positions in the league table. The Vet Ladies Team has moved up a place to now lie in 7th, while the senior Ladies have improved considerably from 13th to 10th. Individually Jo Page has rocketed up from 18th to 8th place, while Claudine Benstead became the first ORC lady to get maximum points for being first home in her age group. Individual age category places can be hard to assess as some of our runners have missed a race, but currently Jane Jackson is still holding on to 2nd place in the FV60 group and Karen King is 6th in hers.

The men’s teams have also gained ground with the Senior team improving well from 17th to 12th and the Vet team from 11th to 10th. Again individual category places are tricky to determine with some absentees from different fixtures, but Stephen Sincock is in a strong 2nd place in the MV55 category and it was good to see Ian “daddy” Page running well again to collect a maximum 100 points in his age category for the second time.

One ORC, Mike Westland took on a very different sort of race when he ran the 9 mile Oh My Obelisk on Sunday, organised by Dawlish Coasters. Starting and finishing at the Dawlish Leisure Centre, this is an all terrain race which includes plenty of mud, country lanes and forest trails, with some spectacular views. Mike ran well in his first race for a while, finishing in 1.32.20 in cold and windy conditions.

Thank you Jane for continued reporting.