Too much to mention

In another busy weekend of races there were some outstanding performances from Okehampton Running Club members. Saturday evening saw the the inaugural Nightjar Night Race held on the heaths around Bicton and Woodbury Common. It is named after the the nocturnal bird that returns from Africa each summer to breed on these heaths. There were two routes here, one of five miles and the other of over nine and six ORCs chose the shorter race while just one tackled the 9miles of running by head torch. Here is Jo Bradford’s report for those who didn’t see it on FB.

The ORCs fielded a fast team for the inaugural Nightjar Night Race on Saturday night at 8pm. Run in the dark with head torches across uneven and varied terrain this undulating 5 Mile trail race took in pebble-bed heathland and Woodbury common, starting and finishing at Bicton Arena to receive a lovely medal.

Hayden Bond set off at a rapid pace and was soon lost from sight to the rest of the field, he deservedly won the race with a stunning time of 33.36. Coming in so quickly he rather caught the race organisers off guard.

Second ORC over the finish line was Jo Page with an equally impressive time of 36:00 to win the First Lady prize, casually setting a new Senior Ladies club record as an extra reward for her efforts.

Tom Andrew was the third ORC in, taking slightly longer than planned after he spent a lengthy period at the mid-way feed station sampling the delights of the jelly sweets on offer, eventually romping over the line on a sugar-high in a rapid time of 40.38

After spending the entire second half of the race without seeing another runner, Jo Bradford came in to take second lady overall in a time of 42:54, which earned her the First Lady Vet 40+ prize as well.

The combined times of the first four ORCs home saw Hayden B, Jo P, Tom A and Jo B lift the fastest team award as an extra bonus on a night of successes for the club.

Next over the line in a time of 44:28 was Karen King to take third lady overall, remarkably setting the clubs first 5 Mile record in the FV40 category in the process.

After not racing for several months, the Nightjar saw the return to toeing a start line for Liam Keen, who enjoyed the race thoroughly and finishing in 53:39.

The only ORC brave enough to take on the challenge of the longer, 9 Mile race was Mike Westland who crossed the line in a time of 1:33:40 and as a result won the MV category. 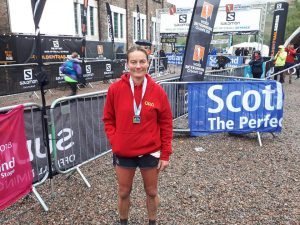 A huge challenge was undertaken by Okehampton’s Gill Spinney when she ran the Salomon Ring of Steall Skyrace in Scotland on Saturday. In the tradition of Skyrunning this race incorporates uncompromising mountain running, such as scrambling along mountain ridges with steep ascents, traverses and descents on technical and challenging terrain. This year the event hosted the World Skyrunning Championships covering three different distances, from the Vertical K, a 5k race with over 1,000m of ascent, to the 29k Ring of Steall with 2,500m of ascent and the 65k Ben Nevis Ultra with 4,000m of ascent. The race started and finished in Kinlochleven which sits at the foot of the Mamores in the coastal glen between Glencoe and GlenNevis. In a race packed with top international runners Gill was not over-awed by the company she was in and enjoyed the atmosphere with the streets lined with cheering crowds ringing cowbells and clapping. Her 18 mile race summited 4 Munro’s (Scottish Mountains over 3,000ft) with two ridges, including the Devil’s Ridge, a narrow track with sheer drops either side where there was a section of scrambling involved. The terrain was everything from boggy tracks at the mountain bases to scree and large rocky areas to pick her way through. Gill has long wanted to do this race and was thrilled to be a part of it this year in particular. Gill finished in a time of 8.03.03, very tired but unscathed unlike many of the runners whose wounds bore testament to the difficulty of the terrain. This was the longest race she has ever run in terms of time but Gill has vowed to return next year now she knows what she is taking on. 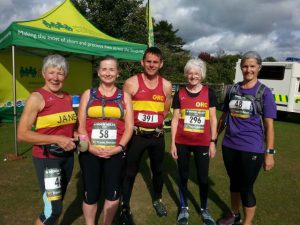 Saturday afternoon also featured the rescheduled Yelverton 6 Moor Miles Race which had been postponed from earlier in the year due to bad weather. This is a one lap course across open moorland in the lovely surroundings of the Maristow estate and hosted by Plymouth Harriers. Five ORCs, Phil Read, Danielle Fullford Brown, Ruth Bushell, Jane Richardson and Janet White managed to make the new date and all enjoyed the good weather this time round. Times unavailable at present. 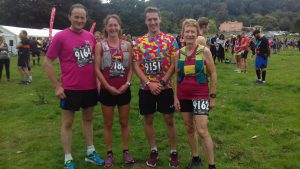 On Sunday there were four ORCs taking part in the Killerton half Marathon, a tough and very hilly multi terrain race. Organised by Relish Running Races in partnership with the National Trust, the course took in some of the most scenic but challenging parts of Killerton’s countryside, with nearly 2,000ft of ascent. First home for the club was George Haskell in 1.48.43 followed by Sarah Marvin who had a fantastic run, improving on her time last year by 16mins to finish in 1.53.46, coming third lady overall and first in her age category. Mags Jarvis was pleased to finish inside her target time of 2hours 30 by finishing in 2.27.52 to come 2nd W60+. Richard Jones had entered the race some months ago, but due to lack of training he pulled out after the first 11k.

Thanks to Jane for pulling together the report and to everyone who sends in some great text to makes Janes reporting some much easier. thanks everyone and well done.