Ladies Day on the Tsunami

Last weekend was all about endurance with seven runners taking on the incredibly tough Tsunami races organised by PureTrail where the options were a 36mile Ultra, a marathon and a 16miler using the most rugged, wild and remote sections of the Southwest coast path between Westward Ho! and Bude. The name Tsunami referred to the effect the race was meant to have, with each distance starting at two hour intervals there was a tsunami-like effect, gathering more runners the further down the course they went. On an incredibly hot and humid day, the scenery was stunning and was the only compensation for the massive effort involved, the Ladies won the day. Robert Richards was the only Okehampton runner in the Ultra marathon that started in Westward Ho! but he had to retire at Hartland Quay feeling unwell after completing a tough 21 miles. 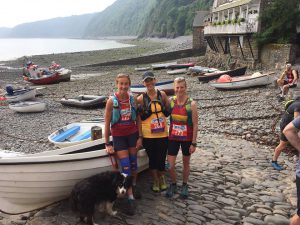 The marathon saw Jane Jackson, Christine Fritsch and Jo Turner, take on what has been acknowledged as the toughest marathon in the south west, with over 5,600ft of ascent and the relentless, steep up and down being at its worst in the last 10 brutal miles. Starting in Clovelly harbour the first task was to climb up the steep, cobbled streets to join the coast path at the top. From here to Hartland Point was a mixture of woods and fields with a few stiff climbs and sets of steps on the coast between there and Hartland Quay. Running together they made the 1.00pm cut-off point here easily although Christine was already suffering the effects of the horribly humid heat, even considering pulling out, but a cool down in a stream thankfully revived her, a practice they continued to use at every stream crossing. From there on the unrelenting hills and difficult terrain restricted the running to short stretches between tricky downhills and the next climb, finishing with a half mile through the town to the finish at Bude Castle. All three were using the race as training for upcoming ultras so were not aiming for a fast time, just completion, which they achieved in 7.55.28. 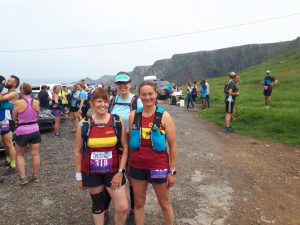 Three more runners ran the 16miler, which although less distance, was by no means an easy run, taking in the toughest section of the coast path and having over 3,200ft of ascent. Gill Spinney was first home for the club, running strongly over ground she had trained on for the race and coming home in 3.52.44. Carole Cornwall and Katy Speak ran together and, despite being no strangers to tough off-road races, found it hard and very uncomfortable in the heat. They completed in 5.38.11, deciding they would not want to do this one again, despite the glorious scenery. 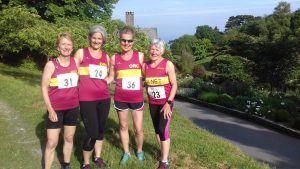 Just as this race was nearing its conclusion, four more runners were about to set off on theirs. Tempted by the draw of a visit to a National Trust property and cream tea at Coleton Fishacre. Janet White, Ruth Bushell, Kathryn Volkelt-Igoe  and Mags Jarvis visited the house and beautiful grounds then took part in the Coleton Footache race of just over 6 miles. The route took in about 3 miles of the coast path south of Brixham and they were rewarded, by stunning sea and coastal views. After reaching the World War Two gun batteries at Forward Point they climbed about 100m heading inland. The sting in the tail was another drop back down through the fields and final climb back up through the gardens to the finish. Even though the race was in the evening the conditions were still very warm. Mags was first to finish in 1:16:50 and won the prize for the 1st W60-64. Ruth and Kathryn ran most of the race together and finished in the time of 1:26:27 and Janet completed the course in 1:29:01. 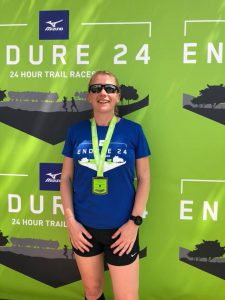 Endurance was all that mattered in a challenge completely new to any ORC, taken on by Jo Page this weekend when she took part in Endure 24, where, as part of a team of four, she ran a 24hour endurance race. Set in the scenic Wasing Park Estate, Aldermaston, it was a relay race over an 8k loop to be completed as many times as they could, starting at midday Saturday and finishing midday Sunday. Already becoming renowned for her ability to race every week, Jo had no idea exactly what she was letting herself in for when she agreed to replace someone who had dropped out of the team, but with her positive attitude of trying anything out she thoroughly enjoyed the challenge of repeatedly running the same loop with only about 2hrs break in between her runs. Jo, being the fittest in her team did some double laps to make up for the slower runners and by the end had run an incredible 50miles, with their team completing 135miles in total. 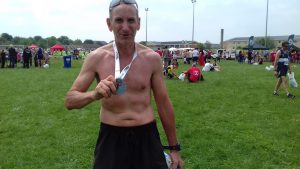 Roger Voaden continued to make his way towards joining the 100 Marathon Club when he ran the Yeovil Marathon on Sunday. Just a week after running the Dartmoor Discovery, Roger enjoyed the somewhat less hilly route of this two lap race which starts and finishes on the athletics track at RNAS Yeovilton and follows country lanes around the town. Roger had a good run, finishing in 3hrs 12min. 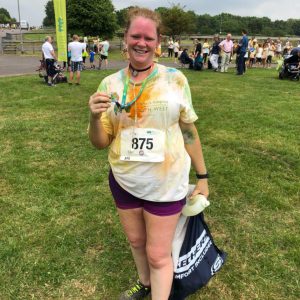 At the other end of the distance scale, but equally a big achievement, new member Louise Jane completed her first ever race. Louise only started doing some running at the start of the year and then joined the club to give her the impetus to carry on. Helped by the support of the club and her training runs, she completed the Rainbow Run in Exeter in 35.20 and now looks forward to improving her time and fitness. 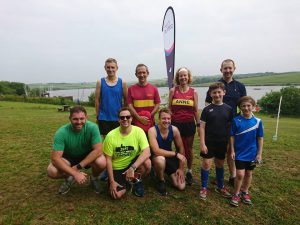 There was a good turnout of ORCs at the weekly park run at the Tamar Lakes where some good times were posted by all, while some great runs were scored at the Run Exe 5k earlier in the week. Here four ORCs took part, with Jo Page (21.32), Jo Bradford (23.33) and Lotte Smith (28.34) all running PBs. Andy Vernon also ran a good time of 18.52 although not a PB.