Last weekend saw Okehampton Running Club members take part in races from Cornwall up to the Scottish Highlands. On Saturday the focus was very local, with Dartmoor Highground holding its trio of races, the Dartmoor 50, Dartmoor Marathon and ten mile Yes Tor races all of which start and finish in Simmons Park. All the routes were fully marked so there was no need for self-navigation. The conditions were good with just enough breeze on the moors to help cool the runners, and the ground still pretty dry. With one ORC running the Ultra and three running the marathon there was plenty of opportunity for club supporters to get out on the course and see runners at various points. The Ultra runners set off at 6.00am and after a first visit to Yes Tor they then complete a loop on the eastern side of the moors including Cosdon Hill, Steeperton Tor and Hangingstone Hill, before heading back via Oke Tor and East Mill Tor to climb up to High Willhays. From here the route largely follows that of the marathon course, taking them to Kitty Tor, and Great Links Tor before there is a welcome checkpoint and feed station at Nodden Gate. As the name Highground implies the runners were sent over the top of all these high points, often by the steepest routes while our runners frustratingly knew of gentler ascents and better paths. After a steep ascent of Branscombe’s Loaf the marathoners drop down to Meldon reservoir and another checkpoint while the Ultra runners stay up high and go back to the moor to rejoin the other route later. After another visit to Yes Tor both routes head back to the finish but not before climbing over West Mill and Rowtor. Even the finish has a cruel twist in that after crossing Kempley Bridge into the playing fields the runners have to run around the edge whilst being able to see the finish to their right. First home for the club in the Marathon was Katie Littlejohns with a brilliantly paced and superbly run race to come home First Lady in a time of 5.05.19. She had run much of the race with Mike Baker, but pushed on after Meldon checkpoint with the knowledge that the leading lady was not far ahead of her and finished strongly after passing her rival at West Mill. Mike also had a great run, putting to bed the “Did Not Finish” demons of his run last year when he did not pace his run so well, coming home in 5.41.00. New member Lucian Flynn was the third ORC in the marathon and had chosen this as his first marathon, doing very well to complete such a tough one. 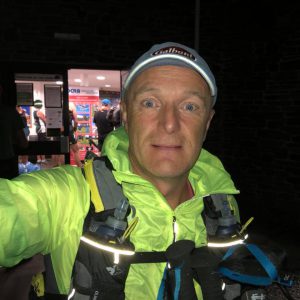 The 50 miler was the first time Robert Richards had attempted such a long distance, having completed a 34 mile ultra in Dorset in July. He had a mixed race with some very low points and some parts where he felt good, but despite feeling unwell at the halfway checkpoint he rested and recovered to push on again. He was very relieved and immensely pleased to finally finish in 15hr 20min 20sec. Despite his tiredness his final run in from Rowtor, Culver steps and the East Okement Valley, Robert filled with adrenalin with the knowledge he had succeeded ran in to the finish very strongly, to be greeted by a large contingent of ORC runners who waited patiently to see him finish.

While the Dartmoor Marathon had an elevation gain of 4,900ft over the 26 miles, ORC Paul Crease achieved nearly this elevation over a mere 9 mile race the same day when he took part in the iconic Ben Nevis race in Scotland. Due to the seriousness of the mountain environment and the difficulty of the race, entry is restricted to those who have completed three category ‘A’ hill races. After a 2,000ft scramble to the summit, Paul was hoping for a good descent, being very strong and fast at this part of any fell race, however he was amazed at the speed some of the top runners went down. Paul held his own though and even passed some until he had a fall off the edge of the path, skidding several metres down the mountainside which luckily resulted in nothing more serious than losing some skin from his shin. He decided to ease up a little for safety but still finished in a very good time of 2.00.42, having done Okehampton and himself proud in such company and in what is an incredibly tough race.

Jackie Dawes was the only other ORC to run on Saturday, taking part in the Dartmouth Regatta Road Race. This 5.1 mile race starts and finishes on the South Embankment and follows a very hilly route but with beautiful views of the coast and estuary. On a hot day Jackie was pleased to finish in 45.20 to be second in her age category. 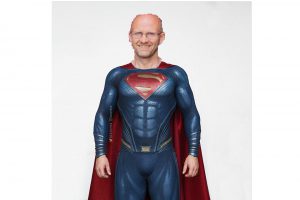 Sunday saw two more races where club runners were testing them selves. Three ORCs, Hugh Robinson, Paul Carter and Rob Kelly, were in need of a half marathon race as part of their Barnstaple marathon training and so made the trip up the M5 to Bridgewater. The race sets out from Moragian’s Rugby Club and heads  east across the Somerset levels. The pan flat first few miles were punctuated by some gently undulating hills before heading back along the same route via a small out and back section. Rob and Paul set out quickly with Paul paying a little for his early exuberance towards the end of the race, being passed by Hugh along the way. First home with the Coe group bragging rights was Rob in an impressive 1:22:17 to come home in 13th place. Hugh made up a good number of places in the back half of the race to get 17th in 1:24:08 whilst Paul won the “Super vets” category only just behind Hugh, taking 19th overall in 1:24:51. In a travesty of justice the Super Vet winner didn’t get a prize; Hugh and Rob and currently starting a crowd sourcing campaign to rectify this and buy Paul a pint or two! 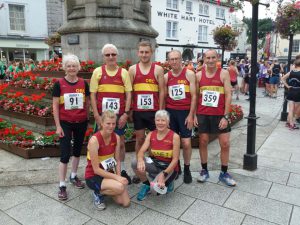 Nearer home the Treggy 7 had its usual good representation of Okehampton runners with seven members setting out from Launceston Town Square on the seven mile circular course. The route is along undulating rural roads with a long climb to the village of Tregadillett after which the last 3 miles are mainly downhill and a fantastic finish line in the grounds of Launceston Castle. First home for the club was Roger Voaden in a time of 46.53 with Christine Fritsch first of the ladies in 1.04.36. Other ORC times; Hayden Bond, 47.00, Andrew Vernon; 47.41, Ged Fitzgibbon; 1.01.00, Jane Richardson; 1.15.50, Janet White; 1.22.53.

Last Monday Okehampton’s Christine Fritsch took part in the Lustleigh Fair 10k, which forms part of the very traditional Lustleigh Village Show. This race is always held on August Bank Holiday Monday and is quite a tough multi terrain course, although with too much road for Christine. She still enjoyed the off-road sections, finishing in 1.03.30.

Thank you as always to Jane for the gathering and editing of this report, plus further thanks to Hugh Robinson who took the time to prepare the Bridgwater part of the report.