Where have all the guys gone?

It seems these days the Ladies are the competitive ones. Where have all the guys gone?

Four intrepid Ladies from Okehampton Running club took to an impressive challenge that turned into a dramatic race due entirely to the break in the wonderful sunny weather. With course changes at the start and during the races.

The Something Wild Trail Running Festival is a family friendly trail running event at Dartmoor National Park. It takes place at Huccaby Farm, nestled in a secluded valley and surrounded by the fabulous landscape of Dartmoor.

Gill Spinney gave a great performance in her longest run yet by attempting the Marathon distance, then Jo Page, Christine Fritsch and Mags Jarvis completed the half- marathon. Both courses include tough climbs, enjoyable downhills and, of course, Dartmoor’s best trails and views.

The trail marathon was the blue ribband event. Starting and finishing at the festival site at Huccaby, it crosses the fulcrum of Dartmoor where east and west rivers meet at Dartmeet and completes a circuit of Bellever woods via Yartor, Babeny and Sherwell Farm. It then heads east along Dr Blackalls Drive, crossing the river for a second time at New Bridge following a bone jarring descent and heading in to Holne Woods, then on in to Hembury Woods, skirting the brook before ascending the steep climb up Pupers Hill via Scorriton, a long, gradual descent to Coombestone Tor and the final crossing of the river at the Huccaby stepping stones, before reaching the sanctuary and bustle of the festival site. This route was changed during the race to one 8 mile loop and 3 of the 10k loops. Gill had to stop the river crossing on her second 10k loop as the water was chest deep and running very fast making the crossing particularly hazardous. Gills race was shortened to about 21 miles and finished safely at the festival site.

The original half marathon route started and ended at the festival site at Huccaby Farm, crossing the river at Dartmeet before climbing gradually to Sharp tor and along Dr Blackalls Drive to New Bridge, and on to Holne Woods. Crossing through Holne and return via Holne ridge to Coombestone tor. However due to the weather they had to change the route to two loops of their 10k route for the half marathon. This still involved crossing some stepping stones across a river. The ORCs had to wade through the river as it was assessed as being safer than jumping across the slippery rocks although up to their waste deep in water, the water rising on every minute that passed. On the second loop the race team had closed the river crossing and changing the route during the race and had to turn back the way they came. In the end the final finishing course was about 12.5 miles. Jo Page was 1st female overall. Mags first FV60. All came in safely within 3 hours.

A fellow ORC, Mike Westland on a family trip to London competed in the Lee Valley Velo Park series 10k race. On this moto GP styled race circuit, Mike stormed his way to a fun and frantic attempt at his personal best. The race is set in Lee Valley’s Velo Park, a normal home for BMX cycling, this was the first opportunity to run the route on this spectacular one mile circuit at Olympic Park. Mike came in with an impressive 52:14mins which was 35th out of 125 runners and second in the FV60 category. 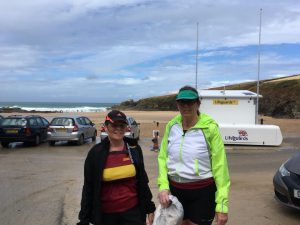 Two other lady ORCs took to a races of a different kind, they took part in Runners Against Rubbish. Each running team ran a specified part of the South West coast path and collected as much litter as possible. During this weekend the whole of the South West coast path was being run by groups doing the same. Carole Cornwall and Katy Speak ran from Padstow to Porthcothan, a distance of about 13miles. No medal or time but the satisfaction that they collected two bins bags full of rubbish. 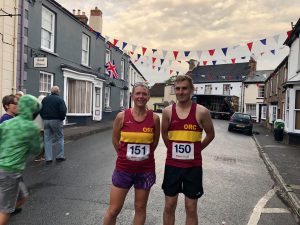 And finally, Jo Page and Hayden Bond tried out short but fun annual race at the Chulmleigh village fair. A short 2 mile race with hills and Jo finished first lady with Hayden coming in second overall.

PrevPreviousThe long and the short of it all!
NextMarilyn’s Meldon madness and much moreNext