Too much Too young!

Once again Okehampton Running Club members have been travelling far and wide to take part in races from France to Scotland.

Bristol was the former home of two ORCs who returned there on Sunday to run the Bristol Half Marathon. Karen King and Abby Williams set out to enjoy their run on home turf and raise money for the Make-A-Wish Foundation, a charity close to Karen’s dad’s heart. With the departure of the rain, the near perfect conditions and support from their families helped them to produce a great run to finish in 1.49.14 a PB for Karen and Abby’s first race since 2015! Jason Ewing feels very much at home in Bristol, spending much of his working life there and ran the race for the third consecutive year, finishing in 1.38.18 to set a new PB. Another ORC, Rachael Hayden, also ran for charity here, choosing to raise money for Macmillan Cancer Support, and coming home in 2.17.57. 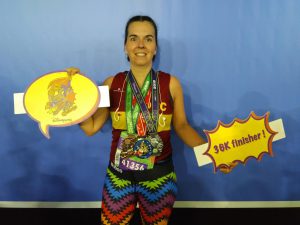 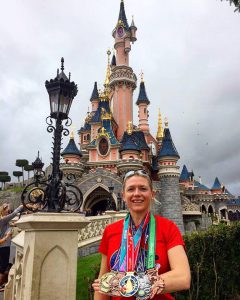 For two ORC’s a visit to Disneyland Paris was to take part in one of their themed weekends of races, this year’s theme being Disney villains. Starting with a 5k on Friday, followed by a 10k on Saturday, they run a half marathon on the final day. The courses are through the Disney Parks with plenty of Disney characters to pass en route, at the end of which the rewards are huge medals and colourful T shirts. Okehampton’s Nicola Leach already has a set of these medals from her trip here last year, but for Jo Page this was her first experience of these magical races with five medals up for grabs on completion of the three races. The 5k and 10k races aren’t timed but the Half Marathon is and both ORCs were very happy with their times. Jo Page ran an incredible race, starting in the second to last pen and crossing the start 45mins after the gun went, she stormed her way past over 7,000 runners, round a very twisting and turning course, finishing in 1.37.51 to be 7th senior lady and knock 10 mins off her previous PB. Nicola hasn’t been running much recently while training for her nursing degree but was pleased to improve on last year’s time to finish in 2.13.23. 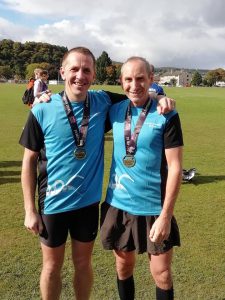 Scotland was the destination for ORCs Roger Voaden and Geoff Hill to run the Lochness Marathon. Geoff has completed this race twice before, but for Roger this was his first time round this very scenic course that follows the Loch’s south eastern shore and then along the River Ness into the centre of Inverness. On a day of sunshine and showers the views beside the Loch were stunning and Roger completed his 90th marathon in 3.10.09 while Geoff had another run hampered by training problems, finishing in 3.33.19, just over a minute slower than last year. 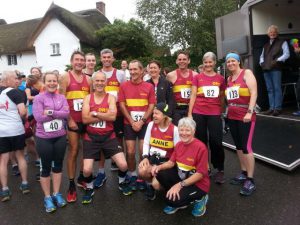 Nearer home the War Horse 10k was a completely new race, marking 100 years since the Armistice and starting in the pretty village of Iddesleigh, home of the War Horse author Michael Morpurgo. There was a great turnout from Okehampton with thirteen runners taking part, all enjoying the route through quiet country lanes in the sunshine that followed the clearance of the rain just before the start. First home for the club was a relatively new member, Stephen Sincock, who has done very little running leading up to this race but certainly pulled it out of the bag to finish in 44.06, coming sixth overall and First Male Vet. The first ORC lady home was Lucinda Walsh, running her first ever race to come home in a great time of 58.14. Christian Davies, one of the club’s junior runners, enjoyed his first 10k with an impressive run to claim the First Junior prize in a time of 48.09, while Jo Drew completed her first 10k race in 1.13.21.

The aptly named Bovey Beauty had only one club member, Rob Hicks, representing the club this year. This tough fell race across some of the more remote areas of East Dartmoor National Nature Reserve has spectacular scenery and attracts more runners every year with a record entry again this year. The rain cleared before the start to give good running conditions but leaving it wet and slippery underfoot. Rob ran well, staying with the leader and eventual winner over the more technical and hilly first half of the race but dropping down in the later stages to finish third in 1.19.00, a course PB of three minutes for him and just a couple of minutes behind the winner who set a new course record. 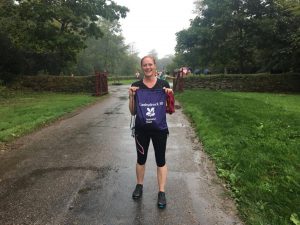 For one Okehampton runner, Emma Dean, the rain was very much present throughout her race the Lanhydrock 10. This 10 mile multi terrain race through the beautiful Lanhydrock estate took place on Saturday afternoon in very wet and boggy conditions. The hilly course, largely on forestry tracks and trails and the muddy conditions did not deter Emma who thoroughly enjoyed her run, finishing in 1.27.19, an excellent time and unofficial PB for 10 miles.

Another amazing run report by Jane. Thanks as always from us all.