‘Tis the season to be “Extremely Jolly”.

Races at this time of year tend to be about having some fun round a muddy course while wearing some non-too practical fancy dress. This was the case for most of this week’s Okehampton runners taking part in races guaranteed to result in mud covered shoes and waterlogged clothes there were several on offer last weekend, starting with the Extremely Jolly race at Escot House in Ottery St Mary on Saturday. This 7 mile run offered multiple chances to get completely wet at river crossings and copious amounts of mud to run through, but also boasted another opportunity for the runners to get even wetter by shooting down a waterslide over a slippery, wet tarpaulin, with a photographer at the bottom to capture some great action shots. Okehampton had five runners here, all finishing in the top 50 places and led home by Angus Farrelly in 1.08.10, with exactly a minute separating him from super-vet Ian “Daddy” Page in 1.09.10 showing you are never too old to enjoy some festive mud. Jo Page, Karen Vallance and Emma Dean had fun running together and finished in 1.12.40. 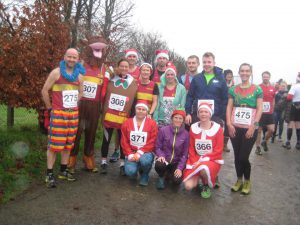 Sunday saw the Christmas mud and hill ritual of the Torrington Christmas Caper. This mixes a tough competitive off-road race with a great tradition of ridiculous fancy dress and is renowned for its great atmosphere. Starting and finishing at Torrington Rugby Club the course is just under 10 miles of muddy fields, woodland tracks, some road and some stretches of the Tarka Trail. The recent heavy rain ensured that the runners not only waded through knee high water at river crossings, but also at several other places where the water had collected. Okehampton had 17 runners, some serious and some just out to enjoy one of the last races of the year. This year there was an opportunity (for our runners only) to re-fuel on mince pies and chocolates and have a drink of mulled wine at Watergate, the halfway point, provided by fellow ORCs Jane and Derek Jackson. At the sharp end of the race there was no time to stop for Paul Carter who had a great run to come 17th overall and first MV50 in 1.12.02 with club mate Stephen Sincock not far behind and taking 2nd MV50 in 1.13.31. Jo Page was next, who, despite not feeling too well, clocked a great time of 1.17.45 in a full Mrs Santa costume to take the first Senior Lady prize. Most of our other runners were only too glad of a chance to stop for some much needed sustenance, hoping the mulled wine would make the second half seem less painful. 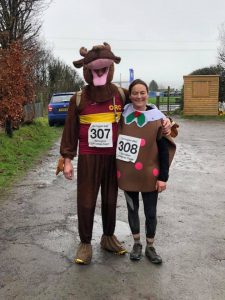 This was particularly the case for Gill and Phil Spinney who had opted to run dressed as a Christmas pudding and a moose! Unfortunately the extremely mild day made it uncomfortably hot to run in a moose suit which also had the disadvantage of weighing considerably more after wading through stretches of water which got trapped in the legs. There was some consolation however in that they won the best fancy dress prize for their efforts. 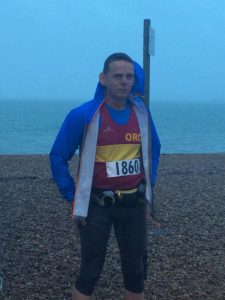 One ORC though had a much more serious task ahead of him on Sunday, when Phil Read took on his first full marathon, running the Portsmouth Coastal Waterside Marathon. Phil joined the club along with his wife Susan through the beginners group a couple of years ago and soon found he most enjoyed the off-road and moor running. He has progressed to become a consistently good runner but has never tackled anything more than a half marathon distance before, so this was a big step up for him. The race started on Southsea Pier and followed the coast out to Hayling Island and back with the terrain a mix of shingle beach, some slippery and muddy paths, as well as some road. While coastal races may be flat, the gamble is with the weather on a site that is exposed to the wind, luckily however, conditions on Sunday were dry and mild with little wind. Phil ran a great race, pacing himself well and feeling strong throughout to finish in a very good time of 4.04.17.

While the majority of ORCs chose Torrington for their festive mud race, one member, Liam Keen, took on the alternative mud-fest of Mud Crew’s “The Scrooge”. Held at the Lost Gardens of Heligan this race is billed as 7 miles of muddy trail running and festive fancy dress mayhem but this understates the real nature of the course where, in wet conditions the runners may end up wading through chest-high water or even swimming. Despite not having been running much recently Liam enjoyed himself here finishing in 2.09.45 having clocked 2 miles more than advertised.