The long and the short of it all!

In an exciting week of racing there were some great results by Okehampton running club members across a broad spectrum of race types and distances. Wednesday evening saw eight ORCs travel to Exeter to try and set some fast times at the Exeter 10k. Starting and finishing near Haven Banks the course was two laps of the Riverside Valley Park where light cloud and no wind made for ideal running conditions. First home for the club was Graham Bryant, whose time of 39.27 was a new PB and the first sub-40minute 10k by him. He was followed by Ed Dumpleton, also setting a new PB of 41.23, going under 42 mins for the first time. Next was Hayden Bond in 41.36, followed by a duo of ORC ladies who both produced superb runs with Karen Vallance just holding off the fast improving Jo Bradford to beat her by four seconds. Their times of 47.25 and 47.29 respectively saw Karen set a new club age group record which has stood for eight years. Jo’s time had equalled this record and had set her a new PB by 1min 38sec. Mags Jarvis’ time of 51.23 was equally impressive, giving her the highest age graded percentage she’s had and a platinum award. She was followed by Ged Fitzgibbon in 53.18 and Phil Turner, who replaced his wife Jo due to a last minute injury and set himself a new PB of 57.54. 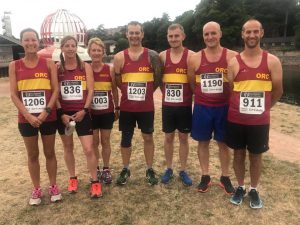 The following evening the Tavy Town Relays took place in Tavistock with Okehampton fielding teams in the Senior men’s, Vet men’s and Vet women’s categories. These well established 1.1mile lap relays with teams of 4 runners are fiercely contested for club honours, with supporters and fellow runners making for an exciting and electric atmosphere throughout the course. The ladies were the first to race with two vet teams running and they rose to the occasion, particularly Sarah Marvin who ran first leg in one team and then stood in for the injured Jo Turner to run the anchor leg in the other team. She and her fellow runners Karen King, Karen Vallance and Jo Bradford were rewarded with second place in the vet category. This set the benchmark for the men’s races where two vet and one senior men’s teams took part, and also a mixed team of men and ladies. The men again put in some great runs, with competition even between the fellow ORC teams, but the men’s A team of Rob Kelly, Paul Carter, Andy Vallance and Andrew Vernon were strong and finished in second place ahead of the fourth placed B team. The other ORC teams were; Mens Vet B; Hugh Robinson, Alec Robinson, Ed Dumpleton, with Hugh running a second time for the absent Steve Gentle (4th). Ladies Vet B; Anne Binns, Jane Jackson, Kathryn Volkelt-Igoe, Sarah Marvin (8th). Men’s senior; Graham Bryant, Hayden Bond, Tom Andrew, George Haskell (10th). Mixed; John Binns, Louisa Jayne, Jaqueline Rice, Mike Westland (19th). 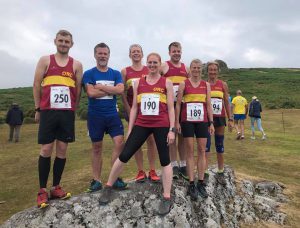 Two days later eight ORCs were out running a completely different type of race, the iconic Haytor Heller. This notoriously tough and hilly moorland race, starting and finishing in the shadow of the great Haytor rocks, has a cruelly steep uphill start but a wonderful downhill finish for those brave enough to hurl down to the finish line. Christine Fristch and Rob Hicks had completed this race before but for the others this was a new experience, turning out to be successful and enjoyed by all. Rob was happy to have a good run round while not racing too hard having recently come back from injury, but still came 7th overall and first M35 in a time of 44.33. Emma Dean has been running really strongly in her recent races and her time of 1.03.41 rewarded her with 2nd F35 here. Jane Jackson was running her first off road race since her ultra marathon two weeks ago and was pleased to win the FV60 category in 1.11.24. Together with Jo Page and Christine Fritsch these four were placed third ladies team. Other ORC times; Hayden Bond; 56.14, Jo Page; 58.05, Tom Andrew; 1.01.36, Jason Ewing;1.03.42, Christine Fritsch; 1.09.39, beating her previous course time. 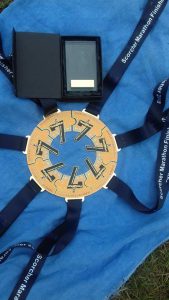 Perhaps the outstanding performance of the week was Roger Voaden’s participation in the Salwick Scorcher 7 in 7, a series of seven marathons in seven days, held near Preston in Lancashire. These races were all following the same five mile loop repeatedly throughout every race, so called for both physical and mental strength and even a marathon specialist like Roger found them tough going, particularly in hot conditions. Roger’s times for the marathons were; 3hr 20 (1st), 3hr.28 (1st), 3hr 58 (2nd), 4hr 46, 4hr 07, 3hr 50 and 4hr 25. 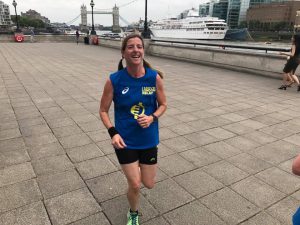 Another unusual event that has seen three ORCs participate in recently is the I Move London Record Relay attempt taking part in the city throughout July. The aim is to set a new official Guinness World Record for the longest continual relay while at the same time supporting three charities who help combat homelessness, mental illness stigma and help reduce gang violence. Running throughout the day and night, the 4,000 miles will be completed by 2,500 runners over 5k and 10k laps where the baton must never be put down. Jo Page and Hugh Robinson have completed stages earlier this month while Jo Bradford finished off a very successful week of races with her leg on Sunday.

Jo Bradford gets the medal for being in 3 events and 3 photos in the same weekly report. Jo Page now has finally got some competition!

Finally, its not often you get to run against a form Olympic Champion Dame Kelly Holmes, Okehampton’s leading Park runner, Jane Richardson, will never forget this weeks Exeter parkrun where Dame Kelly Holmes joined the runners. Despite claiming to not run much nowadays Dame Kelly finished first female and 7th overall and was an inspiring presence there, Jane feeling honoured to finish on the same results sheet as her, even with hundreds of other runners.

Many thanks as always to Jane Jackson for your sometimes investigative journalism and Robert Richards for the easy task of publishing.

PrevPreviousDash, Door and Rock
NextWhere have all the guys gone?Next