Another running challenge was set for Okehampton Running Club members to tackle last weekend. This time it was just a one word challenge – BIG, leaving the members to put their own interpretation on it. Luckily, despite a bad forecast both days turned out to be pretty good weather conditions for running and many headed out to the moors to make their runs BIG on elevation. 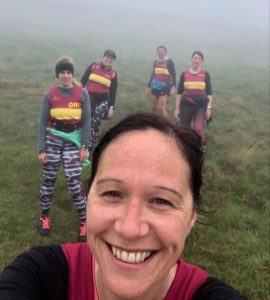 High Willhays was the most popular spot, being the highest point in the south of England and with a total of 12 ORCs choosing to run up this big hill, some taking in Yes Tor too. Robert Richards didn’t visit High Willhays, as three times up and down Yes Tor from different directions was sufficient for his BIG run with an elevation of over 1,000m. With the easing of lockdown guidelines it was now possible for groups of up to 6 people to run together while maintaining a social distance so a group of 5 visited these two high points early Saturday morning when the run was best described as windy, foggy and boggy – Dartmoor at its best!

Just running on the moors was a BIG challenge for some of the confirmed road runners in the club, so moor runner Ali Holiday guided a group out to one of her favourite high places on the moors, Hangingstone Hill.

Joe Lane enjoyed a misty run early on Saturday when he based his route on the letters B.I.G being the first letter of places visited. These were Belstone Tor, Ivy Tor and much further away, Garteven Ford, though the inclusion of this was probably just an excuse for a long run on the moors! 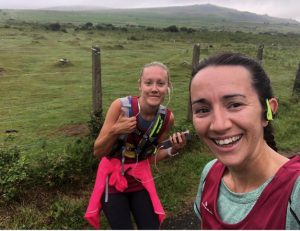 There were some inspiring runs from members who used the challenge to take on runs of a bigger distance than they’d ever done. Gemma Lawson and Jodie Monnox were completely new to running when they took part in the club’s Couch to 5k course and gradually they have increased the distance of their runs until this weekend when they both did their BIGGEST runs ever, completing a half marathon.

Robert Kelly took the biggest run theme to another level. Having had his favourite race, the 32mile Dartmoor Discovery, cancelled this year, and having just turned 40 he decided to do a 40 mile run, his BIGGEST run ever. Running repeated out and back loops on the Granite Way, he stopped only to take on board food and talk to his family who had come out to support him.

BIG became a relative word for runners coming back from injury. One of the club’s most senior runners, Janet White, broke her ankle last year while running on the moors. The timing was bad with first Christmas, then bad weather and finally Lockdown making it hard for her to get back into some sort of running routine. Recently she started a return to running program so 5 times 4minute runs was a Big mark in her comeback and the club members look forward to seeing her out on the moors once more. BIG was also relative for ORC’s most senior runner, Jane Richardson who has spent the last 12weeks in complete lockdown, only running round her garden, so a 3k run certainly felt BIG.

There were several attempts at “Strava art” by members to “write” the words BIG with their route showing on their Strava running app. Ricky Davies’ was the best of these, with a well planned and very readable BIG-on-a-stick!

Sunday saw some very BIG runs too. Jo Page and Jo Turner had a lovely morning running the Dartmoor 600’s, a 19 mile self chosen route covering all of Dartmoor’s peaks over 600m. 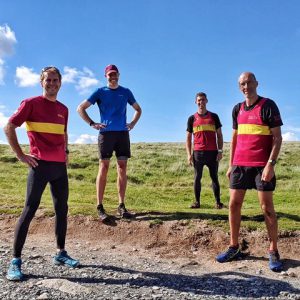 The word BIG didn’t really begin to describe the run taken on by three ORCs and a friend who followed the route of the Dartmoor Perambulation. This is an ancient route dating back to 1240 when King Henry III decreed that the Sheriff of Devon and 12 “lawful knights of the country” should confirm the boundary of the Forest of Dartmoor. 780 years ago this was completed on horseback, and the runner’s route visited all the points listed in the original boundary perambulation, resulting in a run of 48miles across rough terrain with an ascent of over 2,200m.

Five ORC ladies made up a virtual relay team over the weekend, taking part in the V55 category of the Eikden Relays, a virtual race with the runners total distance covering a full marathon, 42k. With a few last-minute reshuffles of the team due to injury and one team member thinking she was older than she was, Claudine Benstead ran two legs and Michelle Luddington stepped in to take the other vacant leg. They, together with Mags Jarvis, Jaqueline Rice and Jane Jackson were pleased to find their team had come third.