In terms of numbers, the biggest race of the weekend was the Tavy 7 where an impressive turnout of 27 ORCs braved a biting gale force wind that blew straight across the open moorland around Plaster Down, the setting for this very popular race. Despite the wind there was some great running by Okehampton members with a good haul of prizes being won. Janet White claimed the only ladies age group prize with a win in the FV65 category, while Jo Page, Emma Dean and Jackie Dawes made up the second placed Ladies Team. Jo was the first ORC lady home, fourth lady overall and third Senior Lady, setting a new ladies club record for the distance, while Jackie’s time set a new FV50 club record. Andrew Vernon was the first ORC home and took the second MV50 prize for his efforts. Mervyn Rice was third MV60 setting a club MV60 record, while ORCs took two prizes in the MV65 category with Ged Fitzgibbon having a great run to come second and Paul Evison claiming third. Andrew Vernon, Hayden Bond, Mike Baker and John Binns made up the third placed Men’s Team. 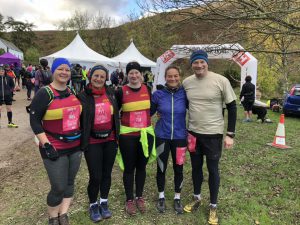 On Saturday Five club members set out to Exmoor to take part in the Exmoor 10k Trail Running Challenge, one of four distance options organised by The Trail Events Company. Set in the beautiful Doone Valley, these races start and finish at Cloud Farm near Malmsmead with distances from 10k to ultra marathon. The 10k route follows a trail beside the lovely Badgeworthy Water through ancient woodland before turning to climb up over open moorland, crossing Lancombe Ford and Malsmead Hill to descend through a steep coombe back to Cloud Farm. Phil and Gill Spinney ran together, this being Phil’s first race for over a year due to injury, and finished in 1.16.42. The other three ORCs also kept each other company, with Sarah Bell and Jessica Corcoran finishing in 1.38.02 with Claire Sprague close behind in 1.38.19. 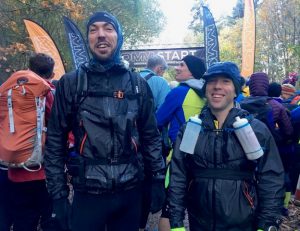 On a more challenging scale, Okehampton’s Rob Hicks, along with his friend Will Hancock took part in this year’s Original Mountain Marathon, or the OMM as it is known. This race changes its location each year and this year’s race was set in the Black Mountains in Wales. It was created in 1968 to test the skills of self reliance, route selection, endurance, teamwork and mountain judgement of those that take part. It is a two day event run in pairs, each team having to carry a tent, cooking equipment and food for 36 hours along with a considerable mandatory kit list. There are a selection of courses to choose from, the Line courses being based on the fastest time around a number of checkpoints, while the Score courses have a fixed period where teams accrue as many points as possible in the time allowed across the two days. At the start of each day they are given a map and have to plan a route visiting the marked checkpoints, finishing at an unsupported wild camp at the end of day 1 and at the event HQ on day 2 . The team visiting the most checkpoints in the fastest time are the winners. Rob and Will chose the Long Score course where some good route choices served them well and in bitterly cold conditions including a couple of hours of snow they did remarkably well, finishing with a top 10 placing among some high class competition.

After running two marathons last weekend Roger Voaden was bagging another one in his quest to run 100 marathons, at the Dartmoor Vale Marathon on Sunday. Roger had a good run to finish in 3.19.59, coming 9th overall and second MV50.

Many thanks to Jane Jackson for all the reporting.