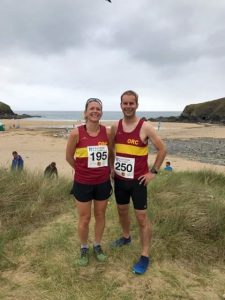 Hot, sunny weather gave way to a muggy evening and eventual drizzle – but that didn’t dampen anyone’s spirits! Setting off north from Poldhu Cove, the route headed up and over the headland to Church Cove and onward along the “undulating” coastal path through Gunwalloe before turning back and making the runners climb all those hills again. Fortunately, the stunning coastal scenery provided ample distraction from the pain in the legs! Jeremy Tandy finished in 7th place, with a time of 47min 06sec, and Jo Page finished in 17th place, 51min 33sec, as second place lady.

ORCs Tom Andrew and Jeremy Tandy tackled the Haytor Heller on Saturday 13th July. Organised by the Teignbridge Trotters, this was the 34th year of the 6-mile off road race. Starting halfway up Haytor (thankfully!) the route headed directly up to Haytor Rocks before heading into the stunning 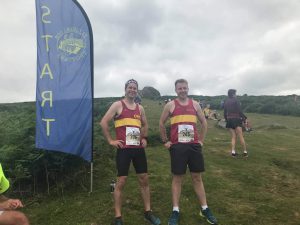 Dartmoor landscape. Out to Holwell Tor, then boulder-hopping down technical single track to Becka Brook before heading up the steep ascent to Hound Tor and then down again through more twisty single track and across the brook once more (wet feet this time!). The route then climbed to Black Hill and then, with runners gasping for breath, all the way back up to Haytor Rocks and a steep grassy descent to the finishing line. Jeremy Tandy, in his second race of the day, finished in 19th place with a time of 48min 45sec (and third in MV45 category). Tom Andrew finished in 150th place with a big smile on his face and a time of 66min 50seconds. ORCs will definitely be back in 2020 for this gem of a race!

The third running of the Lydford Dash took place on Saturday (13th) and attracted 11 Okehampton Running Club runners. The weather was overcast which made conditions better than during the preceding week. The race took place alongside other events in the Lydford Summer Fair. The route was multi terrain, being fairly rough in places. It was basically a figure of 8 course, running on paths and tracks, including the West Devon Way and up and across Fernworthy Down where the runners had excellent views of the moor and surrounding countryside, not that they stopped to look!! First ORC home was Jeremy Tandy in an excellent 32.01 and he was 2nd M40, followed by Andy Vernon who finished in 34.00 and was placed 2nd in the M50 category. First ORC lady to finish was Jo Page in 36.13 and she was 2nd lady overall. Molly Marvin had a great run, forging ahead of her mum to finish 3rd lady, in 37.44. Phil Read finished just ahead of Sarah Marvin in 39.14 and 40.07 respectively. Sarah won first prize in the W40 age category. Ian Page came in next in 41.21 and he was placed 3rd in the M60 category. Christine Fritsch crossed the line in 46.08 and was 3rd in the W40 category. Mags Jarvis came home in 47.21 and she was 2nd in the W60 age category. Janet White was happy that she completed the race in under an hour, in 59.32. Fiona Porter looked like she had really enjoyed the race when she crossed the line 61.34. Andy, Jo, Christine and Janet were all very pleased that their times were faster than they ran last year. 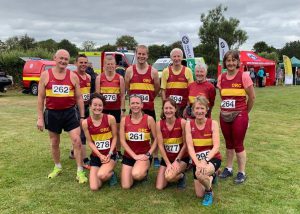 Race To The Stones

Having run her first 55mile Ultra Marathon successfully three weeks ago, Okehampton runner Jane Jackson moved up to attempt a 100k Ultra last Saturday. The Race To The Stones is an iconic 64miler starting in the Oxford Chilterns and following the ancient Ridgeway west to finish at the Avebury Stone Circle in Wiltshire. 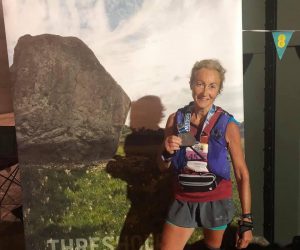 Jane’s morning didn’t start well when the bus taking runners from the finish to the start was so held up in traffic that the runners gave up, got off and walked in adding an extra mile to their day. Twelve miles into the race Jane was one of many to fall, victims of a path full of tree roots, suffering cuts and bruising her ribs. She continued on, determined to finish the race despite having to breathe in shallow breaths. The day was hot and with very little shade on the ridgeway it all made for an uncomfortable day. From 40miles on Jane experienced the nausea she had at the end of her previous ultra and kept going on small sips of water and no food, eventually finishing in 17.03.30, having not enjoyed the experience at all but pleased to have completed.