With weather that belonged more to the end of May than late February, Okehampton runners made the most of the fine conditions to get out and race last weekend. Saturday saw five ORCs take part in the Looe 10 Miler, a hilly run around West Looe and the coastal road to Talland which is part of the Cornish Grand Prix series. First home for the club was Andrew Vernon coming second in his age category with a time of 1.13.32. Katy Speak was the club’s first lady home, finishing in 1.56.51, followed by Lotte Smith in 1.57.22, with Carole Cornwall just three seconds behind in 1.57.25 and Kathryn Volkelt-Igoe in 1.58.25. 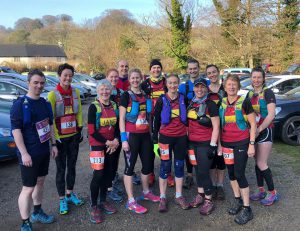 Sunday was an even more glorious day for those taking part in the tough Hameldown Races, the Hameldown 7even and the “long half marathon”, the Hameldown Hammer. In the last two years this has been held in gale force wind and rain, or with ice on the ground and sub-zero temperatures, but this year saw perfect conditions for the twelve ORCs taking on the Hammer and the one running the 7even. The races start and finish in the village of Widecombe-In-The-Moor, at the foot of the Hameldown ridge and the Hammer, with a total ascent of over 600m, is a challenging test of endurance over grassy, rocky and sometimes muddy trails, with stunning views on such a good day. The shorter race is still a tough one with a double ascent of the Hameldown Ridge. First home for the club was Katie Littlejohns, whose impressive time of 1.58.25 secured her fourth lady position. She was followed home by Mike Baker, the first of the ORC men, in 2.15.04, while Jo Turner and Emma Dean ran together, finishing strongly in 2.26.08 to be first and second in the FV40 Category. Other ORC times; Molly Marvin; 2.24.18, Lucy Marrison; 2.34.57, Mags Jarvis; 2.45.38 (1st FV60), Jane Jackson; 2.46.13, Phil Turner; 2.51.33, Janet White; 3.08.31, Alison Holiday; 3.08.31, Rob Cunnington; 3.12.41.

In the shorter, but still tough Hameldown 7even Angus Farrelly was the sole club representative, finishing in 1.20.53. 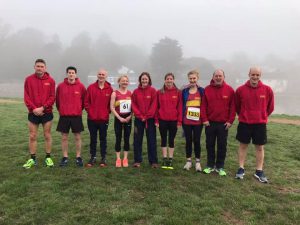 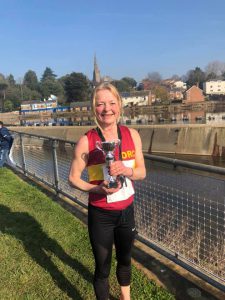 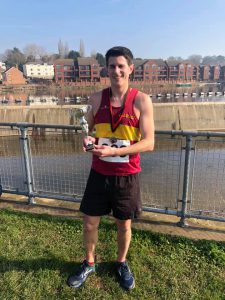 In a completely different setting, nine Okehampton runners were taking part in the Exeter 10k Charity Fun Run over a fast flat course, typical of the Exeter races through the Riverside Valley Park. Here a cool and misty start burned off during the race to give the runners brilliant sunshine for the finish. It proved to be a very successful day for the club with two coming home with trophies and a fistful of new PB’s and club records. First home for the club, was Robert Kelly who had a superb race finishing third overall in a time 35.38 to set a new PB and a new Senior and overall club record for 10k. Next in was Stephen Sincock with another excellent run to come home in 38.45, a new MV55 club record and a platinum level club award. Graham Bryant was next in 39.19, followed by the club’s first lady, Claudine Benstead, with an incredible run to be third lady overall in a time of 41.30 to set a very high benchmark for the club’s FV55 record. Sarah Marvin was sixth lady, setting a new PB and new club FV45 record with her time of 43.51, with Jo Bradford finishing in 46.03 also for a new PB. Paul Evison was in form, improving on his recent 10k PB and club MV65 record by completing in 48.10, earning him his first diamond level award. Mike Westland was happy with his time of 49.10 with Kate Wilson finishing in 53.39. 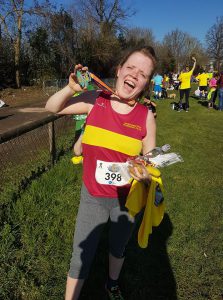 A single Okehampton runner travelled Egham in Surrey to take part in the Thorpe and Egham Half Marathon on Sunday. This is a relatively new race with a fast, flat course along the rural roads of Surrey. The prospect of a very large medal lured Rachael Haydon to take part here but having been out of action with a cold recently did not aim for a particular time so was thrilled to finish in 2.07.48 to knock five minutes off her PB.

What an amazing weekend!

Thanks Jane Jackson for pulling it all together.