Team ORC turns out in force for local races.

Okehampton Running Club’s flagship event of the Summer Series, the Oke Croak, took place on Saturday in the typical Dartmoor weather conditions of four seasons in a day. 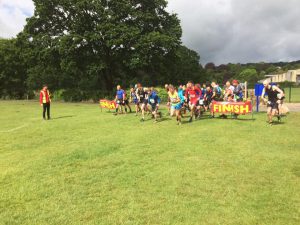 Early heavy rain that may have deterred some from entering, cleared to sunny spells with occasional downpours of rain and even hail at higher levels, but it was the relentless wind that really affected the runners.

Moved from its traditional date of August Bank Holiday to avoid clashes with other races, torrential rain the day before had also made it very wet underfoot. The course starts in Simmons Park and takes the runners out to the moors via footpaths to Chapel Ford. From here it is very much self navigating out to Oke Tor, where they all have to run through a natural stone arch. The route then turns downhill before taking in East Mill Tor and finally climbing to the top of Yes Tor. From there it really is all downhill, although the boulder-strewn slopes of the tor don’t make for a fast descent but there is some better running from the Army Camp back down to the finish in the park. 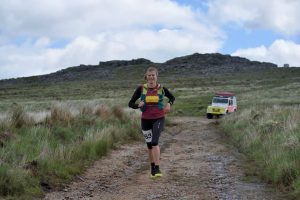 With many ORCs out marshalling and another big race on the Sunday, just six Okehampton runners took part. 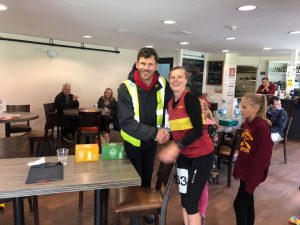 First home was Chris Turner who had only decided to run at the last minute, finishing in 1.34.04. He was followed by Mike Baker in 1.44.59. and the first lady ORC, Katherine Murray, running well in her debut Oke Croak to finish in 1.53.11 and be 2nd Lady. Next was Robert Richards in 2.04.58 and Christine Fritsch who claimed the first FV45 despite not feeling well.

Sunday saw an improvement in the weather for the big turnout of ORCs at the Ruby Run Half Marathon. This is a linear race which runs between Holsworthy and Hatherleigh, with the start and finish points alternating between the two towns each year.  It didn’t take place last year after the organisers struggled to get enough help for it, but has been taken on by Hatherleigh Rotary Club and as usual Okehampton runners turned out in force to support this local race. 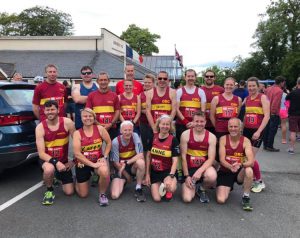 A last minute change of course due to roadworks extended the route slightly to almost 13.3 miles, but there were still some fast times and new PBs posted by ORCs. 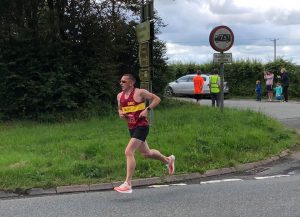 h club mate Hugh Robinson over the last 200m of the course. Hugh had slowly chased down and overtaken Geoff who then mustered a final sprint to regain his position and finish 6th overall, taking the 1st Local Male trophy and setting a new PB in 1.24.36. Katie Littlejohns had a superb run turning up the speed and overtaking the leading lady in the last four miles, to finish First Lady in a magnificent 1.31. 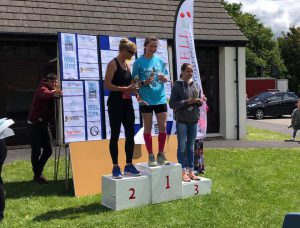 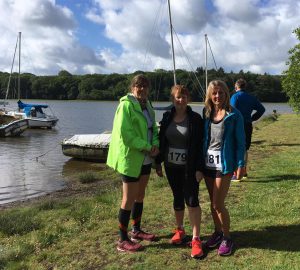 Pretty Damn Fit in Cornwall on Sunday. The route follows the popular cycle trail from Devoran on the south coast along the Mineral Tramway to Portreath on the north coast, a lovely, varied, scenic route with a mixture of terrain. Tracey Mills finished in 2 hours 15 minutes, Carole Cornwall and Katy Speak coming in at 2 hours 30.

During a brief visit home from working abroad, Okehampton’s Jo Page found herself a race and took part in the Arlington Court 10k on Sunday. Organised by North Devon Road Runners, the route follows trails and paths through the beautiful Arlington Court Estate owned by the National Trust. It is well known for being a tough, hilly and often muddy race but Jo took on the challenge with her usual enthusiasm and was rewarded with the First Lady prize, finishing in 46.21.

It was race three of the Run Exe 5K Summer Series last Tuesday. 166 runners turned up to do battle on a windy night down at Exwick. This regular race is a traffic free and fairly fl 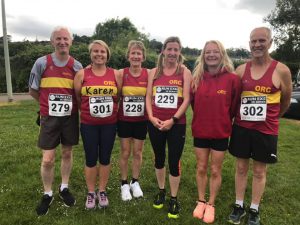