Marilyn’s Meldon madness and much more

Last Saturday saw the second in Okehampton Running Club’s Summer Race Series, the Marilyn’s Meldon Madness, take place. Named after former member Marilyn Cooper who sadly passed away two years ago, this is a 5 mile fell race, starting from Meldon Reservoir dam and taking runners up to Yes Tor and then on to the highest point in the south of England, High Willhayes, before a steep and difficult decent over tussock grass to Black Tor. From here it is all downhill on a path back down to the reservoir. Despite the short distance, this is still a tough race with 1,175ft of ascent and difficult terrain to negotiate, even though the continued dry hot weather had eliminated all the bogs. With an afternoon start, the sun was at its hottest and by the time the runners had completed the first pull up Longstone Hill they were already feeling the effect of the heat and the lack of any breeze. First home for the club was Rob Hicks, taking second place behind Axe Valley’s Tim Lenton, a great supporter of the club’s races. First lady for the club and overall first lady was once again Katie Littlejohns, retaining the Dartington Crystal bowl trophy, kindly donated by Marilyn’s husband Paul and her sons, that she won last year. 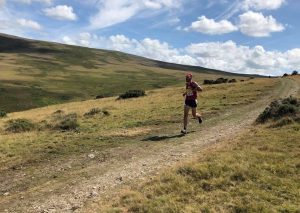 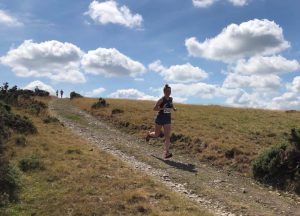 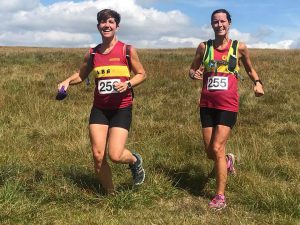 This is the only one of the club’s races where members provide the refreshments and the teas and cakes were a great success, even when the generator stopped working meaning a campervan was drafted in to boil the water! The club would like to thank Waitrose for donating all the drinking cups for the event and the members for providing the much appreciated cakes. They also would like to thank North Dartmoor Search and Rescue who always attend this race in case of an emergency. 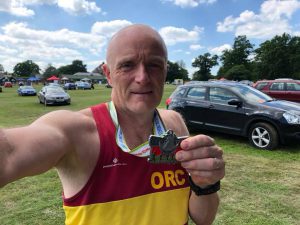 The hot conditions continued for those racing the following day and among them was Robert Richards who ran the Gloucester City Marathon. Here, due to a road safety issue, the race organisers had been forced to replace the usual course with a gravel track event in the nearby beautiful Forest of Dean. Normally a single loop course held on entirely closed and predominantly flat roads, the replacement one consisted of four laps of a forest trail on gravel tracks which did however give some shelter from the hot sun, but with over 2,500ft of elevation it was considerably hillier. Robert took this all in his stride however and completed the marathon in 5:10. 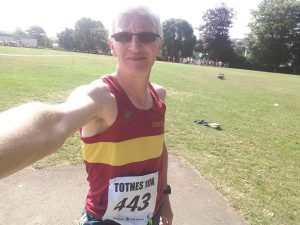 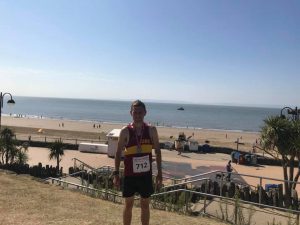 Two other Okehampton runners took part in 10k races on Sunday, with Andy Vernon running the Totnes 10k. Hosted by the Teignbridge Trotters, this race is nearly all off road and mostly flat, following the beautiful River Dart on tarmac, grass, and trail. Andy has run this race before, but struggled in the heat, completing in 45.11. Hayden Bond went further afield to take part in the inaugural Barry Island 10k in South Wales where a course on fully closed roads, took in all of the town’s most scenic seaside spots and recognisable landmarks. Again the scorching temperatures were not appreciated by the runners, but Hayden ran a good time, completing in 42.07. 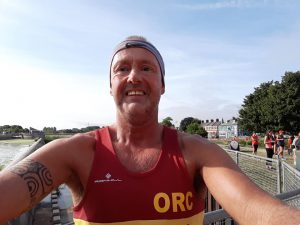 And finally out from retirement (Or was it injury?) Mark Hawkins managed to complete his first race in 15 months by completing the Exeter 5k Park Run in an impressive time of 20:14.

Thanks again to Jane Jackson for your wonderful reporting and to Robert Richards for the posting on to the website.

PrevPreviousWhere have all the guys gone?
NextThe RAT, The Horseshoe and MoreNext