The first ORC fell race of the club’s summer series, “Marilyn’s Meldon Madness”, got underway on Saturday having moved from its historical August date to an earlier May running. The 5 ½ mile race in memory of ORC founding member Marilyn Cooper takes runners from Meldon dam up to Yes Tor and High Willhays (the two highest points on Dartmoor) before looping back to Meldon via Black-a-Tor. It’s a mix of grassy trail and rough, rocky uneven ground with a simple “up and down” course elevation which makes it a quintessentially British fell race.

This year the bone dry ground and short, early season grass benefited racers with even the rough ground lending itself to fast running. Coupled with a clear, windless day all that was needed was a lead runner in form and the six year old course record was going to be under threat.

Young Johny Livingston was up for that challenge and led the field up round Longstone Hill at a furious pace. Johny’s big heart was undone by a lack of familiarity with the course however and the seasoned Devon fell racers who had initially followed took a more direct route to Yes Tor.

Course record holder, Professor Tim Lenton, summited first before powering across to High Willhays, followed by David Wilcox, James Best and lead ORC, Paul Crease, in pursuit. But Axe Valley runner Tim didn’t let up. The descent to Blacktor was soon dispatched and he pushed hard down Longstone Hill increasing his now substantial lead. When he came in view of the finish line it was clear he could break the record and he was cheered on by the enthusiastic ORC organisers to win in 37 minutes 22sec – 16 seconds faster than he ran in 2013. James Best of Tavistock took second, whilst vet 50 runner Dave Wilcox provided further inspiration for vet runners everywhere with his rapid third place. First lady to finish was a delighted Naomi Shaw of South West Road Runners in 51:43.

Paul Crease was first ORC home in 5th place and a time of 42:14 – a touch disappointed with his time (never one to make excuses, Paul didn’t cite that his recent Yorkshire 3 Peaks effort might still be in his legs).

The Marilyn Cooper trophy, which is awarded to the highest placed ORC lady, was deservingly won by Katherine Murray. Katherine rinsed herself with a racing sprint finish completing the course in a time of 54:49, winning a large measure of respect alongside the trophy. 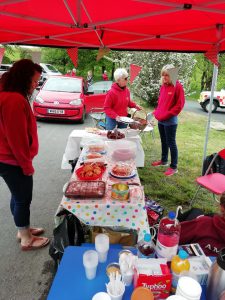 …and not forgetting the famous cake stall at the finish.

Further Okehampton RC runners were: Andy Vernon in 46:49 (he loves the downhill); the consistently improving Elliot Hails in 47:34; the ever popular coach Mike Baker 48:33; closely followed by Alec Robinson 48:39; Phil Read (race tuned after his running holiday) 57:52; Gaz ‘no right to run hills that quick’ Williams 1:02:52; the forever young Paul Evison 1:02:56; smiling Kate Wilson 1:09:14; the positively beaming Ruth Bushell 1:09:19; and the effervescent Janet White 1:19:41.
Huge thanks to North Dartmoor Search and Rescue Team for race support as well as all volunteers, marshals, cake bakers, the kids giving out drinks and the happy sweeper. 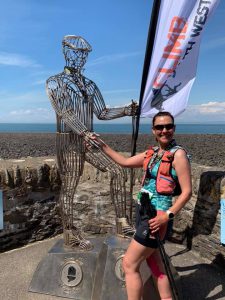 Over the last 4 days Jo-Anne Turner has been running the Devon Coast to Coast Ultra Marathon (total of 117 miles) . She is very proud to say that she managed to complete in a time of about 25 1/2 hours which was helped by the perfect weather and conditions. Karen Vallance decided to join me for day one and did an amazing job – maybe she will decide to be a trail runner now 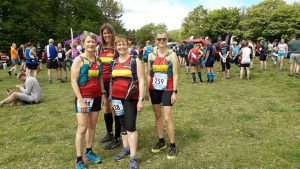 Five members of Okehampton Running Club took part in the Race the Tide 15.5 mile “Long Half Marathon” held in on Sunday in the glorious setting of the Flete Estate, Mothecombe in South Devon. The weather was fine and sunny and the paths dry. The race was held primarily on beautiful woodland trails close the the estuary of the River Erme for the first 7 miles and then across the estuary itself. The runners had exactly 2 hours to reach the crossing area to “beat” the tide! Once over the estuary they joined the South West Coast Path and experienced some typical, tough coastal path ascents for about 3 miles before turning inland to run on bridlepaths and footpaths. Finally they ran back into the woodland on the Flete Estate and to the finish. The total ascent was about 1800 ft.

First ORC to finish was Chris Turner who was 6th senior male in a very good time of 2:26:07. Mags Jarvis and Christine Fritsch ran together and finished in 3:15:12, with Mags coming in 1st W60. Carole Cornwall and Katy Speak started the race but unfortunately were unable to complete it because Carole found she had not recovered from a recent illness. 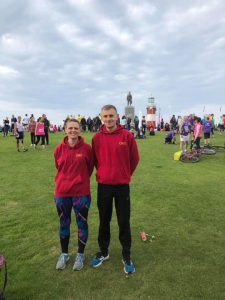 Hayden Bond and Catherine Walker turned up for a very hot and hilly Plymouth Half this morning, even with the nice early start of 8.30 it was soon full sunshine which was not fun! Cathernine didn’t manage to beat her Bideford time but still happy with 2.23.10 considering the conditions. Hayden coming in with a new PB of 1.25.26 . 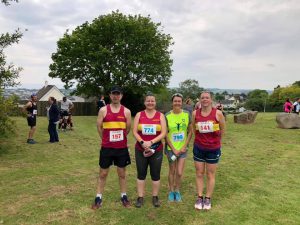 ORC’s all ready for the Cornish Imerys Trail Marathon & Half with Andrew Thorne, Claire Sprague, Lucinda Walsh and Jo Page.

Great run by Roger Voaden at the Exeter marathon 3:11 incredible. He was caught by the paparazzi for an interview directly after his finish.. just another day in the life of Roger Voaden 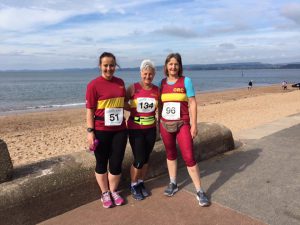 Hot and Sandy at the Exmouth Land and Sand 5k this morning.