Six ORCs made the annual pilgrimage to the crown jewel in the UK road runner’s calendar this Sunday – the Virgin London Marathon. Five of those six had qualified for their places with good for age times from other marathons and were hopeful of running strong times again, cheered on by the cacophony of support that the enormous event, with a field of 44,000 runners, provides. The weather was favourable with cool temperatures and not enough wind to j…ustifiably use as an excuse.

True to recent form, Rob Kelly was first ORC across the iconic finish line on the Mall in a new PB of 2:53:31 – he just keeps getting quicker.

Andy Valance had been unlucky in that his training was badly interrupted by illness in February, but Andy knows how to run a quick marathon and is made of tough stuff. He ran with me the whole way (well, pretty much – he stopped for the loo and to hug his family before looning around like an aeroplane on The Mall; I didn’t stop, took racing lines and generally just suffered) before we crossed the line together in 2:56:52. That was a massive PB for me and my first sub 3 hour – something I’ve been chasing for a long time – and was pleased with a negative split.

Roger Voaden was running his 101st marathon and had actually had time to recover from his 100th marathon (for a change) in addition to put in a good block of training. That resulted in an amazing time for the vet 50 of 2:59:02.

Next home was Roger’s vet 50 stable mate Paul Carter who was rightfully extremely happy with a time of 3:00:33.
Club marathon record holder Matt Pitson had struggled with a hip injury during his training which had inhibited his mileage. He worked hard to go for a sub 3 hour time but couldn’t maintain his early pace and ultimately finished in 3:07:46.

Mark Hawkins had more altruistic reasons for running the London Marathon this year. Whilst he had managed to obtain one of the rarest of commodities – a place through the ballot – he elected to run for Devon Air Ambulance. Mark was lucky to get a helicopter ride from the air ambulance a few years ago (not that he remembers it) and has been supporting the charity ever since. He was just about recovered from his early spring marathon in Barcelona so was not hopeful of his best time, but ran an intelligent, even pace to achieve a time of 3:48:50. Take a look at Mark’s facebook page if you’d like to sponsor him post event. 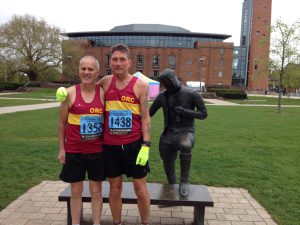 In contrast to the Virgin London Marathon, two of our members instead travelled to compete in The Rotary Shakespeare Marathon to experience the world famous Stratford-upon-Avon swapping inner city roads to run amongst some of the most historical buildings in the country and through miles of beautiful Warwickshire countryside.

A mainly flat, two lap course, starting in the centre of the town, opposite Shakespeare’s old school, taking in sights such as the River Avon, Holy Trinity Church (home to the grave of William Shakespeare) and the Royal Shakespeare Theatres, through quintessential English villages, with chocolate box thatch roof cottages, hump back bridges and pretty dry stone walls.

The day started cold and overcast with a blustery wind left over from the remains of Storm Hannah, but escaping any rain.

The runners enjoyed a well organised and marshalled event with pockets of support throughout the course and even a steel band playing the runners back into town along The Greenway Trail.

Steve Sincock was competing in his first marathon race for nine years and was pleased with his time of 03:08:44 finishing in 30th position overall and second MV55.

Paul Evison was taking part in his first ever marathon and at the age of 66 years made his finishing time of 04:07:51 all the more impressive and a massive achievement finishing as fourth MV65.

Paul Crease ran in the Yorkshire 3 Peaks Fell Race this weekend. First run in 1954 the race covers 37.4 km and 1608m of ascent and descent over the rugged and spectacular countryside of the Yorkshire Dales. The course starts in Horton in Ribblesdale then immediately ascends Pen-y-Ghent and continues on a circular route taking in the iconic peaks of Whernisde and Ingleborough before the long descent back to Horton.
One of the oldest and probably the most (in)famous race in t…he fell racing calendar (it features as one of the 50 races to do before you die!) it has been won by the great and the good of fell racing through the years and this year was won by a Devon exile Brennan Townshend! In the mind-boggling time of 2hrs 50mins 22secs!
The route is a mix of brutally steep and long climbs, fast but technical descents and long stretches of either very fast and runnable track or track so littered with jagged limestone you need feet and ankles of steel to negotiate at anything above a walking pace. This combined with the climatic conditions encountered in the Yorkshire Dales in April where you are at constant risk of either sunburn or hypothermia or both makes this race either for the brave or the stupid… draw your own conclusions.
To enter you need to first satisfy the qualifying criteria and then if offered a place you can toe the line with the other 916 starters for this year’s race.
This years event gave the contenders a tase of all 4 seasons in one day, Mist on Pen-y-ghent, sunshine atop Whernside and then Ingleborough provided howling sub zero winds and mist, which was described by some as Biblical!
Paul Crease gave an excellent account of himself as a first timer with a time of 3hrs 54 mins and 58 secs. You might want to leave it a week or two before asking him if he’d ever do it again..