Friends and Family Half Marathon Challenge

With no sign of lockdown coming to an end anytime soon, once again Okehampton Running Club members rose to another challenge set to them. Head coach Rob Richards and Ruth Bushell came up with a format for this challenge to help the members who have struggled with having to run on their own in lockdown by making it a team challenge, even if the team members couldn’t actually be together. It was also designed to be more inclusive, encouraging the members to reach out to family and friends to be part of their teams whether they were runners or not as walking was also allowed. The teams were to complete a cumulative half marathon over the course of the weekend, with husbands, wives, small children, parents and friends all taking part. This extended to friends and family in other parts of the country and even other parts of the world all doing some miles to put towards the team result. All that was required was for evidence of the distance completed along with a photo of either ORC kit being worn or for non members to print off the ORC logo and pin it to their T shirt and for the team leader to log the team results on the ORC Facebook page. After the enormous success of ORC’s previous challenge it was hard to imagine the response could be any better, but it was staggering.

With great imagination teams put their own twists on the challenge. One of Okehampton’s popular members is Joseph Lynch who has Downes Syndrome. He took charge of the Step By Step team comprising himself, his mother and Mags Jarvis. Completely off his own initiative he decided to use this as a fundraising opportunity, setting up an online page for people to donate to Parkinsons UK as his fellow team member Mags has this disease. Originally aiming to raise £100 its total is already £465.

Some of the faster runners decided that between eight of them a half marathon was too easy, so divided the distance up equally with the aim of running the maximum elevation. Each one of The Only Way Is Up team ran just 1.64 miles but their total elevation gain was an incredible 9,555ft involving many repetitions up and down the steepest bits of hill near their homes or even up and down steps!

Again past members were included in the challenge and responded with a virtual relay of 13 runners all completing just one mile and making a brilliant video of the virtual changeovers with a bottle of wine as the baton to be passed on to the last runner who had supposedly run out of wine in lockdown!

One group of ladies synchronised their runs so that a runner in the Bahamas ran at the same time as two in the UK and one in Dubai. Another team was comprised of runners in South Africa and Australia together with local runners, while Duncan Nicol who took part in the previous challenge aboard a cargo ship anchored off China, now persuaded his fellow crew members to join him, running on a treadmill, this time making their way across the Pacific Ocean towards the USA. 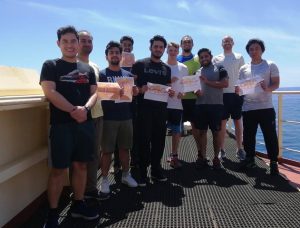 Okehampton member Debs Crome certainly took the opportunity to reach out o friends and family across the country and brought together a team of 30 all of whom ran or walked a minimum of 1km but most did a lot more. With the help of 29 non members, Debs being the only ORC amongst them, they amassed a total mileage of 177miles, equal to over 13.5 half marathons or 6.5 full marathons and by far the biggest collective mileage.

One relatively new member, Jodie Monnox got together a team of 23, including some Okehampton Golf Club members, calling it Complete and Putter Madness. With a lot of key workers in the team it provided a great distraction from their work over the weekend. 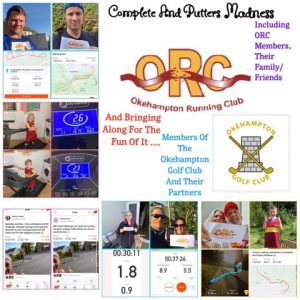 As with the previous ORC challenge 2 weeks ago it was the feeling of being part of a team and part of a club again that was the reward for all who took part. Along with many other less happy memories of this strange time we are living in, there will at least be memories of the moments of shared fun this brought and pride in the achievements of young and old, fit and not so fit who all put some effort into completing the challenge. Once again a massive thanks to Robert Richards who organised it and spent the weekend collating and recording the results, even managing to squeeze in a run himself. 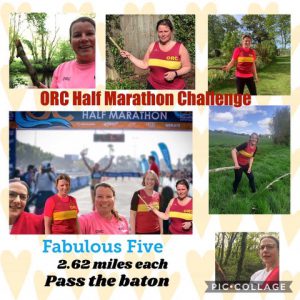