French quarter and all the usual stuff!

Okehampton Running Club’s chairman, Jeremy Tandy, completed a massive challenge and tested his endurance last week by running the Pyrenees Stage Run. This multi-day event is a seven stage race, starting a week last Sunday in Ribes de Freser and finishing last Saturday in Salardu. It is run by teams of two or three competitors for safety and for the experience of sharing this incredible adventure. The distance and ascent of each day varied, with the longest day being over 30 miles, but the total distance for the race is 150 miles, while the total ascent is an incredible 15,000 metres. The tough routes made it possible to be climbing over 1,200 ft of ascent with each mile in places, but the stunning scenery was at its best with most days being blessed by sunshine. This was Jeremy’s first taste of Ultra running and was a huge achievement, having run a total of 49hr 04min 03 sec by the end.

Last Tuesday evening three ORCs took part in the last of the Run Exe 5k summer series. These races are held once a month from April to September and the final prizes are awarded for the best four runs out of the six. Jo Page, Jo Bradford and Andrew Vernon were the three to take part this month and all three ran brilliantly. First home of the trio was Andrew Vernon, running a season’s best of 18.49 to be third in his age category for that race. Jo Page was next going under 21minutes for the first time and setting a new senior ladies club record of 20.52 to also be third in her age group. Jo Bradford’s time of 23.12 put her second in the FV45 group for that race, but meant she was the overall winner of that category for the series. 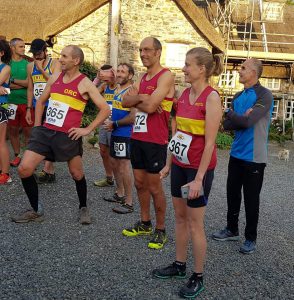 Another Summer series finished on Wednesday evening, this being Okehampton’s own Summer Race Series, with the final race being the Sourton Tor Race. This is a typical up and down fell race of only 2.6 miles, starting and finishing at the Bearslake Inn, Lake. Despite the short distance this lovely little race draws runners from far afield who love the relaxed atmosphere and fun that the course provides with its steep uphill climb and fast downhill finish. With runners coming from as far away as Peterborough, Truro,Taunton and even Sheffield, the race was won for the third year running by Toby Chapman from Bournemouth AC. First home for Okehampton was Paul Crease in 4th place in 20.31 with his Ben Nevis race not fully out of his legs. Next was Roger Voaden, having a warm up for his weekend ultra marathon in 22.28. Christine Fritsch was the first ORC lady finishing in 29.40, and Angus Farrelly was next in 30.54 with Janet White in 39.45.

Sarah Marvin had a great run at the Exeter Riverside Parkrun on Saturday morning where she set a new PB and a new Vet45 ladies club record in a stunning time of 20.53. She has been improving her 5k times recently and this run knocked another 18 seconds off the record she only set at the beginning of August. 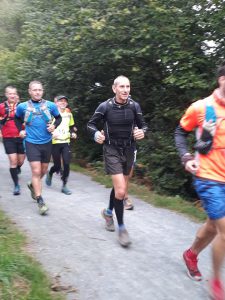 Roger Voaden ticked off another marathon in his quest to reach 100 by running the Dartmoor in a Day ultra on Saturday. Although not really a race, more of a challenge Roger still made sure he came in joint first after 6 hours of running. 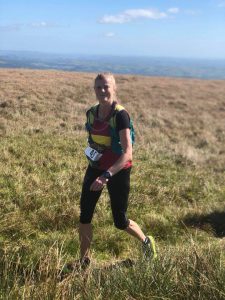 For those racing this weekend Sunday turned out to be a glorious day and this was very much appreciated by Christine Fritsch who took part in the Dartmoor Volcano race. This is a 10.5 mile trail race over rough moorland tracks with almost 500metres of ascent, visiting South Dartmoor’s highest point – Ryders Hill before reaching the focal point of the race, the Red Lake Volcano. Of course this never was a real volcano and is actually a spoil heap from the Red Lake china clay works which were abandoned in the 1930′s but has the appearance of a volcanic cone. Christine didn’t have a great race but still enjoyed the stunning scenery, finishing in 2.10.56. 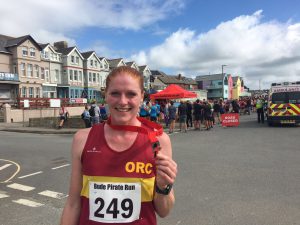 Beautiful scenery was also to be found on the coast where Emma Dean ran the Bude Pirate Run. This picturesque route has just over 8 miles of woods, trails and coastline with plenty of hills, starting and finishing outside Tommy Jack’s Beach Bar in Bude. Emma thoroughly enjoyed this tough but scenic race, finishing in 1.14.19.

Many thanks to Jane for gathering all the news this week and all weeks.