The third round of the Westward League X-country races took place on Sunday. Held in Exeter this event included the Devon Championships where runners can qualify to go forward to represent the county later in the year. This always makes for a good turnout at this meeting and on a mild December day there were large fields of runners in all the races. Despite the recent heavy rain the course was in a reasonable condition with just one uphill section being very wet and muddy. The ladies were the first to race and this year Okehampton had an impressive ten runners competing. The brilliant Jo Page was first home for the club again, followed by the the senior Marvin, Sarah, with our newest member, Claudine Benstead ,making an impressive debut for the club, two places behind and just ahead of Molly Marvin. Jo Bradford was next, desperately trying to encourage team mate Karen King who has had a very heavy cold, who finished a little way behind. Jane Jackson again came in just one place ahead of Christine Fritsch followed by Mags Jarvis and Mel Priday. Not all of the ladies had entered the Championships, but those who did had some excellent results with Sarah Marvin and Jane Jackson both getting bronze in their age categories, while our senior ladies team of Jo Page, Sarah and Molly Marvin and Jo Bradford also claimed the team bronze, as did the ladies Vet team of Sarah Marvin, Jo Bradford, Karen King and Jane Jackson.  Ladies  who didn’t medal were not far off with Jo Page an excellent 8th in the biggest and most hotly contested senior ladies category. Molly Marvin was 5th in the under 20 Women, an improvement of three places from last year and qualifying her for the county Championships. Jo Bradford was 5th FV45, Karen King 4th FV40, and Mags Jarvis 5th FV60. 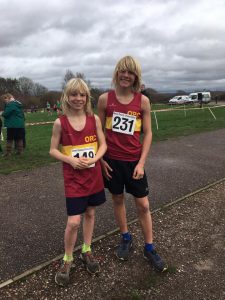 There were two juniors running for the club, Tom and Sam Priday who both ran very well, Sam coming in 4th in his Under 15 category giving him the chance to go forward to run for Devon at County level. 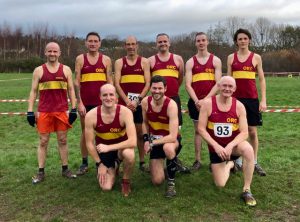 The men also fielded a good turnout, running on a course that was considerably more churned up by now. It was good to have Paul Crease back in the team after missing the Newquay fixture, leading them home with an excellent 53rd place to take the silver medal in the MV45 category. Hugh Robinson was next, just out of the medals to be fourth MV40. Paul Carter ran a great race to be the next home but hadn’t entered the Championships and followed by another great run from Stephen Sincock. Graham Bryant held off a fierce challenge on the run in, while Christian Davies and Indigo Ramsey were still overtaking runners in the finishing straight. Jo’s dad, Ian Page made a great comeback after having to pull out at Newquay with a calf injury, to claim bronze in the MV65 category. It was also a comeback for Stuart May, who has been absent from our team for two years, although not quite as fit as he was then, but non the less happy to run again and welcomed by his old team mates.

The results from this third round have had no effect on the men’s team standings, but the Ladies Senior Team has moved up from 16th place to 11th and the Ladies Vet Team from 13th to 8th. 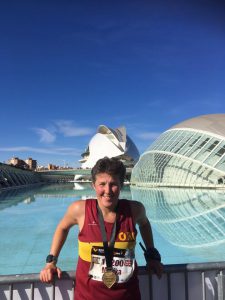 One Okehampton Running Club member, Monika Richards, took a trip to Valencia in Spain to run the Valencia Marathon where the December average temperature of 16 degrees and the entirely flat course make for just the right conditions for a fast PB. This marathon is renowned for the music all along the course and the route is mainly suburban, but does take the runners through the old town and the Turia park, with a scenic stretch along the coast. Monika had only completed one marathon before and was looking to improve on that time. Unfortunately the weather was considerably hotter than usual and she found it hard in the 21 degrees, but determined to fulfil what she had set out to achieve, she pushed on as hard as she could to reap the reward of a sub-4hr finish, coming home in an impressive 3.55.26, an improvement of 6 minutes on her previous one.

Rob Cunnington took on the challenge of a night time race over open moorland when he ran the 10 mile Burrator Noir on Saturday evening. Due to landowner issues, the course had to be changed slightly this year, although the overall distance remained the same. This would be quite a tough race in the light and it was Rob’s first try at night running but he enjoyed the experience despite the relentless uphill climb on a rutted track from the start, finishing in 2.15.01.

Thanks to Jane for reporting.