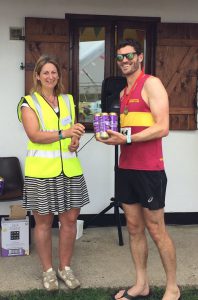 On Saturday there was a good turnout of ORCs at the Lydford Dash, a 4.5 mile race over undulating ground incorporating fields, rough tracks, two river crossings with stepping stones and a bridge, and then across a beautiful common incorporating some of the best views of the moors and the village of Lydford beyond. First home for the club was Rob Hicks, getting back to some form after a long injury lay-off, with fellow ORC Hugh Robinson behind him claiming the 1st MV40 prize. First club lady was Jo Page, to be third lady overall. ORC times; Rob Hicks; 30.45, Hugh Robinson; 32.42, Andrew Vernon; 34.20, Jo Page; 39.16, Tom Andrew; 42.21, Christine Fritsch; 47.45, Janet White; 60.34. 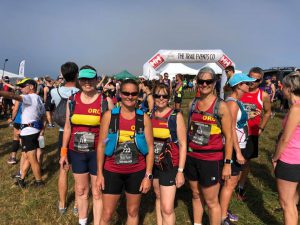 At the other end of the distance spectrum on Saturday, Okehampton was represented by four lady runners in the Lulworth Cove half marathon and a single male in the 34 mile ultra marathon. These races had been the victim of the late snow in March, but at the re-scheduled race the runners would have been glad of something cooler in the baking heat of this recent spell. The course takes the runners west from Lulworth Cove on the coastpath, past the iconic Durdle Door, and on nearly into Weymouth, where they turn inland and back to Lulworth. Here the half marathoners finish, while the marathon and ultra runners then head east on the coast path towards St Albans Head and Poole, turning off and heading back at different points. Despite the steep hills, the stunning scenery along this beautiful stretch of the South West Coastpath, made the huge effort on such a hot day worthwhile. First home in the Half Marathon was Gill Spinney in 2.37.33, after having to drop down from the marathon due to injury. Katy Speak, Carole Cornwall and Ruth Bushell all ran together, finishing in 3.20.26, with Ruth completing her first trail half marathon. 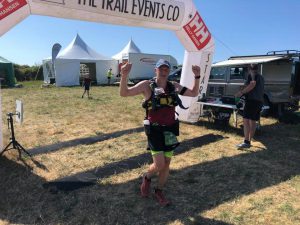 Robert Richards completed his first Ultra Marathon in 8.36.47, relieved to put his previous attempt, when he had to retire feeling unwell, behind him. 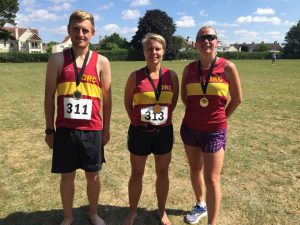 Sunday was no cooler for the three ORC’s running the Care for Kids Barnstaple 10k. The race starts at Park school on the sports field, and then meanders around the historic Rock Park before it continues along Taw Vale and the Strand using the Tarka Trail and over the Taw Bridge, which is the steepest part of the course. It then returns back to the town square along the riverside and into Rock Park, finishing at Park School. The course is a flat, fast one, perfect for a first race as well as an ideal opportunity to gain a personal best. Hayden Bond was the first home for the club in 42.45. Not content with just one race this weekend, Jo Page raced again here, finishing second lady overall and first senior lady in 45.04 while Karen King found it tough in the heat but ran well to finish in 49.43, coming third in her age category.

One ORC did manage to find some water to incorporate into his race when Paul Jelley competed in the Honiton sprint Triathlon. Here the competitors swam 16 lengths (400m) in a pool, before a 20k bike ride and a 5k multi-terrain run. Paul completed in 1.22.24, coming 6th overall and 1st in his age category in what was his third triathlon.

Thanks to Jane Jackson (welcome back) for reporting and Robert Richards for posting.

PrevPreviousOkey Races begin
NextThe long and the short of it all!Next