The Easter long weekend saw the culmination of months of training for three Okehampton Running Club members when they took on the Devon Coast to Coast Ultra Marathon. This is a 117 mile crossing of the county from south to north, following the Two Moors Way and run over four consecutive days, although there is an option to complete it non-stop in under 48hours. All three ORCs, Roger Voaden, Jo Turner and Ali Holiday, took on the four day race, going home after completing each day’s section. The weather wasn’t very kind to them making this huge challenge even more difficult and the conditions underfoot appalling. Day one saw them set off from Wembury on the south coast, and follow the Erme Valley Trail initially with a mix of gentle trails, woods and tarmac to Ivybridge where the Two Moors Way starts and then continue on to Holne where day one finished. The rain did hold off for this day at least and all three made good time, with Roger Voaden finishing joint first with a German runner in a very good time of 4hrs 55min for 29 miles. Day two, the Dartmoor section, was much worse however, with a bitterly cold wind and rain so that by the time Jo and Ali made the checkpoint at Bennetts Cross they were so cold and soaked there was some question of them continuing. However a change of clothes and warm-up in the car saw them push on and thankfully the rain did stop, but when they eventually finished at Hittisleigh Ali was beginning to be troubled by a painful knee. Roger had finished ahead of all the other runners in 5hrs 5mins having covered the 25 brutal miles in shorts! Despite some desperate physio and icing of the painful knee, after just three miles of day three Ali was in pain again. She was determined to finish however and carried on, but after fifteen miles she couldn’t bend her knee and her ankle had also become painful, so she very reluctantly had to retire. This section through Mid Devon was very demoralising with field after field of mud to trudge through without respite, but once again Roger came in joint first in 5hrs 30mins. The final day was perhaps the toughest with so many miles in their legs and the expanse of Exmoor to cross to get to the finish at Lynmouth. After another night of heavy rain most of the paths were like streams or were muddy and slippery and fields had standing water on. Jo was now running with another lady and although very tired was going well. Roger too was running with someone new, a runner who was full of running on the final day but had been much slower on the previous days. As they ran along the seafront at Lynmouth Roger allowed this runner to go ahead of him by a few paces, letting him officially finish first for that day he’d told Roger he had never won a race. Having won all the previous legs though Roger was the undisputed overall winner of the whole race, a great achievement for someone used to running all his marathons on tarmac. He finished the final leg in 5.29 making his cumulative time for the entire race 20hrs 59mins, an incredible time especially given the conditions. 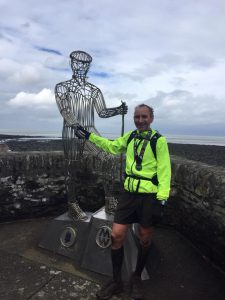 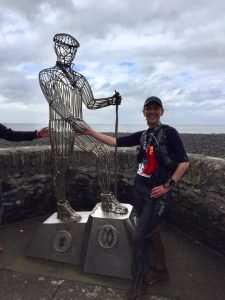 The race officially finishes when the runners shake the hand of the ‘Wire Man’ on the seafront and still smiling, but very tired Jo shook his hand after 8hrs 16secs happy to have completed but promising herself she would never run a multi-day event again! 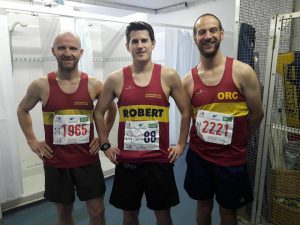 The first of the spring marathons took place last weekend with Okehampton Running Club having runners at both the Taunton and the Manchester Marathons. After all the bad weather of the Easter weekend the conditions on Sunday were just about perfect for marathon running with light winds and no rain. At Taunton just one ORC took part in the full two lap marathon with three doing the one lap half which takes the runners along pleasantly undulating country lanes with no steep hills. In the marathon Rob Kelly enjoyed a terrific run to record his second fastest time ever, finishing in 3.04.48 and running the second half of the race faster than the first. In the Half Marathon there were PBs all round for our trio of runners. First home for the club was Paul Carter, incredibly setting a new PB at 51 years of age, finishing in 1.20.16 to come 6th overall. Ed Dumpleton is finishing every race with a new PB at present and he continued the theme here by knocking 1minute 45secs off his previous best to finish in 1.33.57 despite not having done any long runs for over 6 weeks. New member Hayden Bond also had a great run to improve the time he set at the Bideford Half by a minute, coming home in 1.34.53. 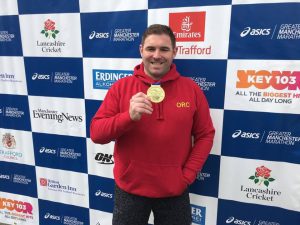 Further away Gas Williams was running his second marathon, taking part in the Greater Manchester Marathon which has a finish in the Emirates Old Trafford, the home of Lancashire Cricket Club. Gaza’s previous marathon had been at Bournemouth and he improved on the time he’d set there by 7minutes, finishing in 5.04.05.

At the Exe to Axe 22 mile race on the South West Coast Path two ORCs, Stephen Gentle and Andrew Thorne, took on this point to point race which is in fact tougher and longer than the iconic Grizzly, though it lacks that race’s status among runners. Stephen had a brilliant run, coming 19th overall in a good time of 3.21.26 while Andrew Thorne completed in 4.23.22.