Bideford Half and the Deep River races

Team ORC were out in strength on Sunday at the Bideford Half Marathon. Always a hugely popular early season race over a fast and flattish course, it gives runners an opportunity to test how their training is going for later races. Starting by the Blue’s clubhouse on the Quay, after a short loop round the streets, the runners follow the undulating main road to the Puffing Billy in Torrington before returning to Bideford via the Tarka Trail. Conditions were pretty good with a brief shower during the race and the Tarka Trail providing shelter from the blustery wind. First home for the club in a terrific time of 1.22.01 was Paul Carter, winning the 1st MV50 category and a bottle of bubbly on his birthday, beating training partner Roger Voaden who came home in 1.23.54. Roger took third MV50, both of them securing platinum club awards and showing their London Marathon training is on target. New member Hayden Bond was next with a stunning time of 1.35.53 in his first half marathon and having only taken up running in the past few months, showing there is more to come from this young man. First home for the club ladies were the incredible Marvin duo of mum Sarah and daughter Molly. Having recovered sufficiently from representing Devon at the cross-country Championships the day before, Molly ran her first half marathon here. After a long day’s travelling to Loughborough and back, they ran together to finish in identical times of 1.46.53, Sarah setting a new club age group record. Mike Westland loves this course and always runs well here coming home in 1.49.59 followed by Karen King running her first half marathon for many years after a long break from running while bringing up a family and pleased to have paced it well and finished strong in 1.52.36. She had run some of the way with Jane Jackson who has finally put her health problems behind her and, despite only aiming to complete the race, ran well to finish in 1.53.53, coming 3rd FV60 and securing her platinum club award. Jo Turner was just a few seconds behind Jane, having run the tough 14 mile Deep River race the day before and barely having done any road running in recent months while concentrating on training for her upcoming Ultra. Jane Jones was pleased with her time of 1.54.27, but would have been home sooner had she not suffered a crippling attack of cramp in the last mile. Pb’s were run by Jo Burrow who knocked a huge 7 minutes off her previous record to finish in 2.08.56, Geralidine Walter, another one to have not run a half for fourteen years with a great run just over the two hours in 2.01.33 and Vicky Hall improving by over 2 minutes with her time of 2.12.58. 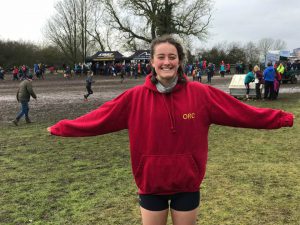 Young Molly Marvin had started the cross-country season late, thinking she wouldn’t fit it in with other commitments but, after running the Newquay leg of the Westward League series, she was so disappointed with her time she couldn’t resist the challenge of improving. Such was her improvement she qualified to represent Devon at the national Inter-counties Championships which meant a trip up to Loughborough on Saturday for her and her family. Having experienced the mud-bath conditions at the Plymouth meeting, Molly coped very well when faced with even worse mud here, even managing to enjoy her run and finishing in the top 200 in the country. So bad was the mud, Molly had to be hosed down before making the return journey home! 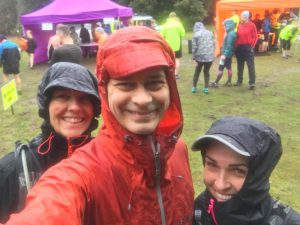 At the Deep River Races on Saturday, Jo Turner and Ali Holiday continued their quest to do some off-road races in preparation for their upcoming four day Ultra. There are two distance options at these races organised by PureTrail Running, a 10k and a Half Marathon which is in fact 14 miles. Using tracks in the Woodland Trust’s Fingle Woods the runners start from near Castle Drogo with both distances crossing the River Teign via the iron footbridge to run to Fingle Bridge along the riverbank. Here the 10k runners cross over and follow the path along the opposite bank to return to the starting point while the longer race takes runners along hilly woodland paths and tracks, including twice visiting the highest point in the woods. The conditions weren’t great with rain and plenty of mud following the snow-melt. Two other Okehampton runners took on this tough course with Stephen Gentle having a fantastic run to finish fifth overall in a very impressive 1.50.19 and Stuart Page coming home in 2.43.34. Jo and Ali were happy to finish in 3.18.39, as this was a training run more than a race and with Jo having the Bideford Half Marathon to run the next day.