Okehampton Running Club held its Awards Evening at Okehampton Golf Club last Friday evening. This annual celebration of the achievements of the runners throughout the year give the members a chance to vote for nominees in different categories, the winners being awarded with trophies. It has been a good year generally and the runners have continued to improve, finding that the friendly, competitive and supportive atmosphere the club generates of great benefit, inspiring them to put in the effort required to compete successfully. Indeed some runners joined the club with no intention of being competitive, but have found themselves drawn into the racing scene and are thoroughly enjoying the challenge.

After a buffet meal, the awards were presented to the winners and certificates covering six race distances from one mile to marathon were awarded to those who had achieved various standards in them. This year six members had managed to fill these certificates at every distance; Robert Kelly, Phil Read, Jane Jackson, Mags Jarvis, Jackie Dawes and Katherine Volkelt Igoe.

This years award winners were;

The Marilyn Cooper Memorial Cup is the only trophy that is awarded on merit and not by votes. It was given to the club by Paul Cooper following the death of his wife Marilyn in 2016 and is awarded to the female member who races the most miles in the year. It was no surprise that this year’s winner was Okehampton’s prolific race runner Jo Page who had raced an impressive total of 337 miles.

Race Director Hugh Robinson presented a cheque to North Dartmoor Search and Rescue for their support at the club’s Summer Series races. The club would also like to thank Williams Osteopathy for donating vouchers for the raffle and David Wills Catering for the lovely buffet food.

Last week Okehampton runners were involved in races varying from 2.7miles to a 3 day stage run covering 125k, and for several runners one race didn’t seem enough. On Wednesday evening two ORCs drove down to Hayle to take part in the Godrevy 10k, the first race of Freedom Racing’s Summer Sessions. Memories of awful weather in previous years were banished by blue skies, sunshine and a breeze to keep the runners cool round the off road course. Starting on the edge of the beach the runners went straight through standing water before the route headed south along the path through the dunes behind the beach, turning back north after 2km and along the beach. Hard pack sand, soft squidgy sand – the route had both, with a slight deviation due to the higher than expected tide. Through the Red River as it flows across the beach into the sea and up the slipway onto the rocky trails over the headland, past Godrevy lighthouse and back to the finish. Jo Page and Jeremy Tandy represented ORC in this fine little gem of a 10k trail race. Out of 264 runners, Jeremy was placed 10th in 44min 12sec while Jo Page was 2nd place lady and 15th overall in 46min 38sec to claim a trophy and some great prizes. 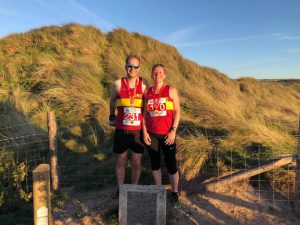 From a short coastal jaunt, Jeremy Tandy moved on to a three day ultra marathon, the Costa Brava Stage Run, starting on Friday with a relatively short first stage of just over 14 miles. The CBSR is more about the experience than a full on race, although there are podium positions for each stage completed, and follows the Costa Brava coast from its beginning in Blanes to its limit in the French region of Roselló, in Portbou, a total distance of 125k. Day one may have been a short distance but still had an elevation of 3,500ft and was run in uncharacteristically wet weather. Stage two saw welcome sunshine but was more of a challenge, covering 32 miles and a huge 7,200ft of elevation, with a flatter section that included 6k of energy-sapping soft sand running. The final day was also 30 miles with 6,700 ft of ascent which Jeremy completed in an impressive 5hr 49min, despite having to contend with a very strong wind, finishing 7th that day and 8th over the three days. 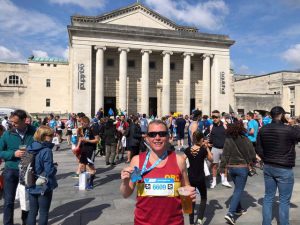 Jo Page is renowned for her love of racing and on Sunday stopped off in Southampton to run a half marathon on her way to catch a flight to Cyprus for work purposes. There are three races on offer here, with full and half marathons and also a 10k. All races start and finish in the heart of Southampton’s city centre with the run course passing iconic local landmarks including Bargate, QE2 Anchor and St Marys Stadium. Jo ran this with the intention of using it as a training run, but with no pressure for a particular time and a good recovery from her coastal 10k, she produced a superb run to set a new PB, finishing 1.31.54 to be placed 5th Senior Lady and 6th female overall, also coming an impressive 136th out of over 3,000 runners. 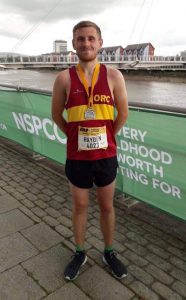 Hayden Bond crammed his two races into one day, starting with the Newport 10k on Sunday morning. This race is held on the same day as the established Newport Marathon and the route starts and finishes on Newport’s riverfront, with a flat and fast course passing some of Newport’s most iconic landmarks and the recently revamped city-centre. Hayden ran this as his first 10k race here last year and improved on that run to finish in 38.20, but aware that he had another race to complete in the evening was cautious not to overdo it. Hayden’s second run of the day was the Cardiff 5k where he set a new PB with a great time of 18.23. 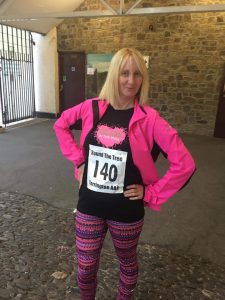 For Okehampton runner Alison Lee just the one race was quite enough though, taking part in the traditional Torrington Round the Tree race on Friday evening. This is a multi-terrain challenge starting and finishing in Great Torrington town square and is part of the towns historic May Fair celebrations. At just 2.7 miles it has a fast and furious downhill first mile but a sting in the tail with an uphill finish. Alison enjoyed the race but found the the uphill finish quite tough.

Okehampton’s Ged Fitzgibbon was the club’s sole representative at the Great Bristol 10k on Sunday. This is a massive race where more than 13,000 runners took part, from elite athletes to those donning fancy dress for a charitable cause. The 6.2 mile course sets off from Anchor Road and loops around the Portway, before passing twice under the Clifton Suspension Bridge, along the Cumberland Basin and up to St Mary Redcliffe Church before returning to the finish point also on Anchor Road. Ged enjoyed the good conditions for the race, but not the company of so many runners, finishing in a good time of 51.23.