Calling all beginners! Please take note as you start your journey into the runners world, toying with your own goals and ambitions everything is possible. Liam Keen joined the club in September, having only started running in April, pushing himself until he was able to run 5k so that he could join one of the club groups. He did extremely well to complete his first ever race in the Dartmoor Vale 10k in 58.00 and is now looking to take on other challenges.

On Saturday, Roger Voaden and Chris Aylen made the long journey to North Wales to take part in the Snowdonia Marathon. For Chris, this was his third visit to the race, but for Roger it was a new marathon to try out. The first Snowdonia Marathon was held in 1982, and was conceived as an alternative to the many city and town races that were becoming so popular. The spectacular route, encircling Wales’ highest peak, has made this a must do event for marathon runners and this year over 2,500 people took part. With two huge climbs in the course, the total ascent is 823 metres, meaning that if it was run on the flat, the distance would be 29.3miles. A slightly misty day meant that the tops of the mountains weren’t visible, but the scenery was still very impressive. Both runners enjoyed their runs with Roger clocking another excellent time for such a difficult course to finish in 3.23.06 and coming 6th MV50, while Chris Aylen completed in 4.55.31. 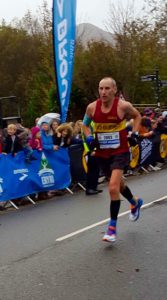 Sunday saw Paul Carter, Rob Kelly and Chris Turner all take part in the Sibelco Dartmoor Vale Marathon much closer to home. This is a two lap race along country lanes, starting and finishing at the Newton Abbot Racecourse. The course is relatively flat but has quite a hill at mile 6 which is then repeated at mile 18. Paul Carter ran a superb race to finish in 3.15.53, coming 6th overall and first MV50. Chris Turner, who is setting new personal bests with every race recently, also put in an incredible run to come home in 3.19.23, improving on his current PB by nearly eight minutes and finishing 11th overall. Rob Kelly also had a good run, finishing only four places behind Chris in 3.23.47.

Geoff Hill had withdrawn from the full marathon here, having had to take a break from training due to injury. He felt fit enough to run the half marathon however and was running very well up to mile ten, when he started to feel the lack of training. His pace slowed but he still completed in a very good time of 1.35.07 to come second MV40.

Completing the list of marathoners on Sunday was Robert Richards. He had set himself a huge challenge by taking on the Exmoor Trail Marathon as his first ever marathon. Starting in the beautiful Doone Valley, this is a very tough trail run with open moorlands, wooded valleys and coastal paths, encompassing some stunning scenery but accredited with the steepest marathon climb in the country, with the total ascent for the marathon being nearly 5,000ft. Robert loved the whole thing and did himself and the club proud by finishing within his target time of six hours, completing in 5.49.57, to come third in the MV50 age group. 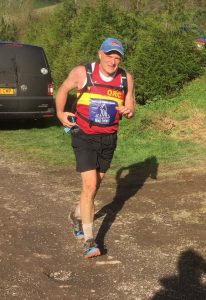 And for something different…. Mags Jarvis took on a different discipline on Sunday when she competed in the Dartington Duathlon, held in the grounds of Dartington Hall, Totnes. Competing in the Sprint distance, she started with a 5k road run, followed by a 20k bike ride and finally a 2.5k off road run. Mags had done this race last year and was very pleased to find she was nearly four minutes faster this time round, finishing in 1.45.54. This year Mags was the oldest female competitor, coming second in the “Vintage” (60+) age category. 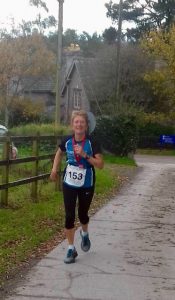